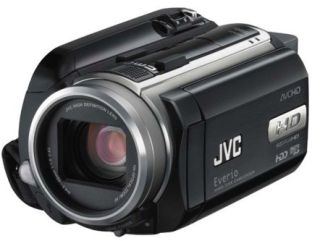 JVC today released information on a new range of AVCHD camcorders: the GZ-HD40, HD30 and the HD10. The series includes a top-end shooting capacity of 50 hours (HD40) and also the world’s smallest Full-HD camcorder, the HD30.

The HD40 and HD30 are also the first ever AVCHD/MPEG2 dual-format camcorders, meaning a combination of the long time compression offered by AVCHD with MPEG2’s superior editing and post-production features.

The HD30 is also the world’s smallest Full HD camcorder, with a 1.8in HDD.

The new HD Everios use new CMOS imagining chips with interpolation technology, which includes codecs for AVCHD in all three, and MPEG2 in the HD40 and HD30.

Noise reduction technology and 1920x1080/60P HDMI output is also included in all models.

New ease-of-use features include Intelligent Grouping, which groups together scenes of a similar theme for easy access, and Digest Playback, which creates a movie trailer-esque montage of scenes when burned to a DVD.