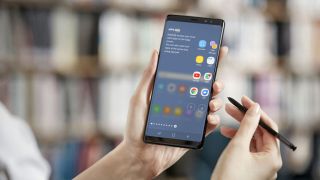 We know the Samsung Galaxy Note 9 is coming August 9, and now we've got one more solid hint at what it's going to look like. The latest leak from Evan Blass, who leaks phone renders left and right, shows a redesigned Note 9 and S Pen in line with other leaks.

Blass's Galaxy Note 9 image was tweeted in responses to a caption-less photo posted by Marques Brownlee of the back of a jet engine that looks similar to the tip of a pen.

This leak further highlights Samsung's commitment to this yellow S Pen, which we've seen in other leaks and even in Samsung's official Note 9 launch invitation.

The image also shows the boxier design for the dual-sensor camera setup and the slim fingerprint scanner moved below that. This change has also shown up in other leaks. It also shows that one of the camera sensors appears significantly smaller than the other, a change from the similarly sized sensors on the Note 8.

Stay tuned for all the Galaxy Note 9 details when it launches on August 9.