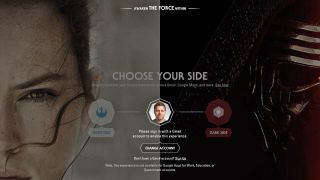 How to get rid of the Star Wars theme in Gmail

There we all were back in November, in a fug of Star Wars excitement, linking our Gmail accounts to Google's lovely new Star Wars theme. What an amazing time it was.

The Force Awakens was yet to be released so the world was embraced by a heart-palpitating nervous hug. This meant that any Star Wars tidbit we could find, any morsel that brought us closer to the upcoming movie was consumed. Hell, techradar even did a Star Wars week, which ended up being 10 days or something.

That was the power of Star Wars, it could bend time. It could make you do things you wouldn't normally do - including hooking your Gmail up to a Star Wars theme that turned the email loading bar into a lightsaber, plonked an X-Wing on Google Map's map and every time you hovered over the volume control on YouTube it made a lightsaber wooshing sound.

But now it's over. We have all seen Star Wars and, on the whole, loved it. But the hangover is setting in and some of us, this journalist included, don't want Star Wars on their Gmail any more. Reality has to hit sometime - there comes a point when reading emails in a galaxy far, far away gets a little tenuous.

Don't panic, though, there is a way to consciously uncouple from the Star Wars theme. The problem is, it's infuriatingly complicated. Here was us thinking you just had to go to Settings > Themes. But that didn't work for us - well done, if it worked for you.

Instead we had to jump through hoops and do the following steps to make the path to the back-to-normal side that little bit easier to take.

1. Head to the Stars

A normal person would think that to unlock the Star Wars theme from your personal Gmail would be as simple as going to settings in Gmail and unticking the Star Wars image and clicking on to another image. While this gets rid of the picture, the lightsaber load screen and everything else still remains. What you actually need to do, is head to google.com/starwars.

This will take you to a lovely page where you can choose either the Dark Side or the Light Side. Remember this page? Remember the happiness it brought you? Us too, but light soon turns to dark when there's no actual box anywhere telling you how to get rid of the theme.

Don't worry: your eyes deceive, don't trust them. It turns out that to stop being part of the Star Wars universe you have to click your avatar and move it to the centre of the 'side choosing'.

Once you are in the middle, then you are very close to ending your love with Star Wars. From here, click on your Gmail address, not Change Account, and you will be asked if you want to restore your default settings. Of course you do. Click this faster than Luke used to bullseye wamp rats and your Google account will finally be back to normal. Good job, kid.