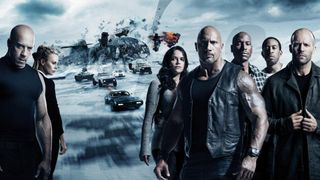 Wondering how to watch the Fast and Furious movies in order? While numerically it's pretty simple, the chronological order of the Fast movies is surprisingly complex. In this article, we'll explain how to enjoy them in both orders, plus we'll rank the movies in order of user scores.

Nobody expected much from the original The Fast and the Furious movie. Vin Diesel may have been hot property off the back of his star-making performance in Pitch Black, but otherwise it was a fairly lightweight story of street-racing in Los Angeles, most memorable for some spectacular driving scenes.

But after three moderately successful movies, the series began to go stratospheric with 2009’s Fast & Furious. As the set pieces got bigger and more preposterous, the franchise ascended to the billion-dollar club that’s usually reserved for space opera and superheroes. The Fast and the Furious is one of the closest things Hollywood has to a banker that isn't owned by Disney.

With Fast and Furious 9 on the horizon in May 2020, though, and a spin-off under its belt, below we'll explain how to watch the fastest franchise in order.

Fast and the Furious movies in chronological order

As if the Fast and the Furious naming/numbering convention wasn’t complicated enough, the order the films were released doesn’t correspond exactly with on-screen continuity.

The rogue element shaking everything up is Tokyo Drift. When Vin Diesel’s Dom Toretto unexpectedly showed up at the end of that movie – returning to the franchise after sitting out 2 Fast 2 Furious – everybody assumed that fourth instalment Fast & Furious would pick up where that left off. But there was a glaring continuity issue – Han (Sung Kang), who’d been killed in Tokyo Drift, was alive and well in Fast & Furious.

As it turns out, Han actually makes his fateful trip to Tokyo at the end of Fast & Furious 6. We subsequently learn that British rogue agent Deckard Shaw (Jason Statham, who joined the series in Fast & Furious 6) was driving the car that killed Han, while the scene where Toretto turns up in Tokyo actually takes place during Furious 7/Fast & Furious 7. Got all that?

Fast & Furious 9 will pick up after The Fate of the Furious/Fast & Furious 8, with Charlize Theron’s Cipher back in action, along with John Cena starring as Dominic Toretto's brother (!) and rival. Whether it’ll also tie into standalone spin-off Hobbs & Shaw is TBC – Dwayne Johnson and Statham are reportedly not in part 9, though it’ll be a massive surprise if they don’t show up in the series’ 10th and apparently final instalment.

Meanwhile, kid-friendly spin-off Fast & Furious: Spy Racers drove onto Netflix on December 26. It’s centered on Dom Toretto’s younger cousin, Tony, but the tone is so different to the movies that we're unsure about calling it canon, so we've left it off the chronology above.

Fast and the Furious movies in release date order

Normally it’s not that hard to work out the release order of movies in a long-running franchise – you just go on the number in the title. The Fast and the Furious movies, however, don’t follow normal naming conventions, particularly in the US.

It was all so simple in the early days, when the original The Fast and the Furious was followed by the pun-driven 2 Fast 2 Furious. Japan-set The Fast and the Furious 3 was subtitled Tokyo Drift, but things got seriously weird for the franchise’s fourth instalment, which was simply called Fast & Furious. No way anyone could get confused by that – though on the plus side, at least it wasn’t called Fast & Four-ious.

Fast & Furious 9 and 10 are definitely happening – the 10th movie will be the last in the series – but don’t be surprised if those names are slightly different when the films are released in the US.

The Fast and the Furious movies, ranked

With the possible exception of Mission: Impossible, long-running franchises don’t generally get better as they go on. But, based on a ranking of Fast & Furious movies assembled from IMDb user scores, it took five instalments for the series to hit its peak. Indeed, that was the start of a three-movie golden run for the saga, before it dropped off slightly with The Fate of the Furious. The first sequel, 2 Fast 2 Furious, remains the franchise lowpoint.