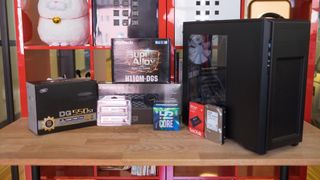 Who says it has to be that expensive?

We set out on a mission to build an (relatively) affordable, VR-ready PC with the help of Newegg that met all the criteria necessary to drive a headset like the Oculus Rift and the HTC Vive, while costing less – for better components – than anyone's PC bundles.

Building a computer yourself not only makes this venture cheaper, it also gives you full reign to upgrade and overclock your system, not to mention choose which headset you want from the start.

Oculus VR recommends an Intel Core i5-4590 processor, but in the interest of a more modern chip – and for the same price to boot – we went with a Skylake-based Intel Core i5-6500. The quad-core CPU is plenty fast at its base 3.2GHz speed, and it has even more headroom with the ability to overlock up to 3.6Ghz.

Unlike graphics cards, you'll be able to stand by the same processor for more than a few years, so it's best to invest in a recent chip.

If you're looking for some more affordable alternatives at the cost of a little clock speed, you could drop down to an Intel Core i5-6400 processor. Ultimately, though, Intel tells us it is critical that you pick up a Core i5-4590 or higher.

Your graphics card is arguably the most important part of your VR-ready build, and so it's best to not cheap out here. Oculus VR has listed the Nvidia GTX 970 and AMD Radeon R9 290 as the recommended graphics cards for running VR experiences. Picking between these parts is a personal toss up, and we decided to go with Nvidia because of its Maxwell architecture's lower power requirements.

Nvidia explains that you should expect a "great experience" whether using the HTC Vive or Oculus Rift. That said, this GPU won't have enough headroom to drive a VR experience and allow users to turn up all their graphical flourishes to Ultra.

In this case, you would be better served with an Nvidia GTX 980 (or the AMD R9 Nano for those in the AMD camp), and, in fact, you can get this card for about $100 more. Alternatively, if you're on a tighter budget, the slightly cheaper Nvidia GTX 960 Ti offers nearly the same performance as a GTX 970 when overclocked. (But, if you're a first-time builder or have never overclocked before, we advise against this.)

Your motherboard is the backbone of your computer and, on top of being compatible with your components, the most important criteria it needs to meet is having two USB 3.0 ports. For our build, we went with the ASRock H110M-DGS, as it proved to be one of the most affordable motherboard solutions available now.

The H110 chipset doesn't leave us any room to overclock, nor does the Micro ATX form factor afford many ways to expand. However, these were passable limitations to get a bargain basement part.

For the time being, the ASRock part is enough to drive VR headsets and gaming in general, but down the line we expect to upgrade this component. Going with a Z170 board enables overclocking fully through BIOS and getting a full-sized ATX board also means more PCI-e lanes to add an additional graphics card and more.

For memory, or RAM, we went with the a standard 8GB kit from G.Skill. This amount of RAM goes between $75 to $100, so we opted to splurge a bit with the DDR4 standard and clocked at 2,133MHz.

Unlike CPUs and GPUs, you can keep using the same memory for years on end and in different builds, even if we were to completely overhaul our VR-ready PC.

Although you can build a gaming PC without flash storage, we simply couldn't pass up the luxury afforded us by building. SSD prices have steadily declined over the years, and you can easily pick up a 120GB drive for less than $50 (about £35, AU$66).

It's not a substantial amount of storage, but the SSD is big enough to hold the Windows 10 OS as well as one or two of your most-played modern games.

To complement the limited space on our main SSD, this Toshiba 500GB hard drive gives us enough room to hold all our other music and document files.

Since the drive spins at a speedy fast 7,200 RPM, you'll actually be able to play games on it, albeit with longer load times. At the very least, it can hold Steam backups locally so they can be quickly ported back onto the SSD.

Building a PC has a lot in common with constructing a house in that they both need a solid foundation. In this case, the foundation is the power supply that provides ample electricity to keep your system running. Not having enough current on hand could lead to some disastrous instabilities from erratic behavior to complete crashes.

With this all in mind, we chose a 550W Deepcool unit, as it provides more than enough power to drive our system and then some for overclocking our components. With the high-demanding needs of a VR-ready PC, we felt that a highly-efficient, 80+ Gold power supply was necessary for its reliability and lower heat buildup.

In the long run, this PSU will also be able to drive any components we add on, such as a second graphics card.

If you're looking for more room in your budget, downgrading your PSU is a fine option. The most important thing is you pick a unit that provides enough power to your system. Otherwise, an 80+ Bronze kit won't break your PC, if you consider modularity as an unessential luxury.

Now that we've gone through all our components, we're going to need to put them into something. PC enclosures all about personal preference, and we chose to splurge a bit on the Phanteks Enthoo Pro M.

This mid-tower is a bit big for our Micro ATX motherboard and a tad pricy, but we expect our VR-ready PC to live in this case for a long time, seeing many upgrades through the years. For example, there's ample room for a bigger motherboard and plenty of slots for expansion.

Of course, when you're building a PC, you're going to need to throw an operating system (OS) onto it, otherwise you'd spend all day looking at the BIOS screen. Windows 10 is Microsoft's latest and greatest OS whether you want it or not, and it's your best option for a modern gaming system.

Although Valve is pushing Steam OS as a Linux-based Windows alternative, it's been in limbo for quite a while. You could also easily turn this build into a Hackintosh, but Oculus VR founder Palmer Lucky has already said when Oculus Rift support will come to OS X.

While we've offered the most relatively cheap route to virtual reality nirvana we could muster, it's not necessarily the only way. There are plenty of alternative builds you could go with, and we've even recommend a few parts as more affordable and powerful options.

Boutique PC makers, like Origin, Digital Storm and Maingear in the US (as well as Overclockers and PC Specialist in the UK), are the perfect stopgap for getting into the customized PC world without having to build it yourself.

Oculus VR has teamed up with several manufacturers to offer bundles starting at $1,499 (about £1,044, AU$1,947) that come with an Oculus Rift headset – which is technically the same price as our build, but at the expense of a lower-end Intel Core i5-6400 processor. Not to mention that most of these bundles force you to choose between a massive spinning drive and a relatively tiny SSD, while our build offers a middle road.

Oh, and these bundles force a largely useless optical drive on you.

Alternatively, you'll find decent pre-built systems, like the ABS Commander ALI014 from Newegg, for not much more than what we've built here. A great deal of towers from Lenovo, HP, Asus, Dell and Acer are well worth consideration.

At the end of the day, there's no shortage of ways to get into virtual reality, but the most affordable way will always be to build it yourself. Whether you follow our build as prescribed part-for-part or add your own personal picks, you should now know more than enough to make a conscious choice of what you need for VR.

Once you're done, check out our video below on how to make sure your PC is VR ready.