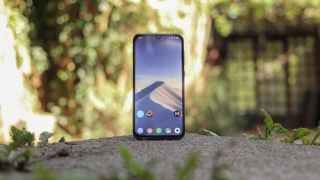 We're looking forward to several big phone launches in the coming weeks, and now it seems that two new flagships could turn up at the same time: a leak suggests that the Xiaomi Mi 10 will be unveiled on the same day that we already know the Samsung Galaxy S20 will be announced.

This leak comes from tech site GizChina, which has shared a leaked promotional poster for the Xiaomi Mi 10. It's unclear where GizChina got the poster from – it cites Chinese social media platform Weibo, but the page linked doesn't feature the poster. Still, there's nothing about the poster to suggest that it's fake, either.

According to the poster, the Xiaomi Mi 10 will launch on February 11 – that'll be a China event though, so in other parts of the world it could be February 12. We already know that February 11 is the date of Samsung's Unpacked event in San Francisco, at which it's expected to launch the Galaxy S20 phones, as well as, we think, the Galaxy Fold 2 and some new true wireless earbuds.

If this date is accurate, it's intriguing that Xiaomi is launching its new phone so close to the Samsung event, as the latter is set to dominate the tech news around those dates. It's also worth pointing out that we were expecting the Mi 10 to be the first phone to launch with the new Snapdragon 865 chipset, yet due to the time difference between China and the US it could be that the Galaxy S20 will claim that title.

Pictures of the phone

As well as the launch date, the leaked poster also has images of what the Xiaomi Mi 10 and Mi 10 Pro will look like, and they're not quite what we expected. Previously we'd heard that the Mi 10 would look remarkably like the Mi Note 10 from late 2019, but based on this poster they look more like another Xiaomi phone.

The two phones shown in the poster have all their cameras in a black strip down the left side of the device. It's certainly a novel look compared to most other smartphones – including Xiaomi devices, which often look like fairly 'standard' Android handsets – but we have seen this strip before, in the Mi Mix Alpha concept phone.

There's no 180% screen-to-body ratio shown here, as on that device, but it may well be that Xiaomi is borrowing the camera layout from the Mix Alpha. Does that also mean there's no camera bump (previous Xiaomi phones had quite a prominent one)? Well, not for sure, but we'd imagine so.

It seems there are four rear cameras on the phones, as we've heard previously, but we can't tell much more about the Xiaomi Mi 10 or Mi 10 Pro just yet. If this leak is to be believed, though, we don't have long to wait before we find out more.