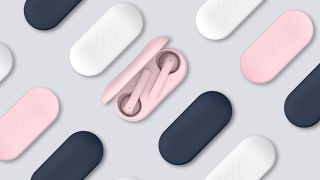 Voice-controlled true wireless earbuds are all the rage, but not everyone is on board with talking out loud to Alexa, Siri, or Google Assistant in public places; that's where the new TicPods 2 Pro come in.

Announced at CES 2020 by Mobvoi (the minds behind the Ticwatch Pro, Ticwatch S and Tichome Mini), the new noise-cancelling true wireless earbuds follow on from the TicPods Free – Apple AirPod-alikes that we awarded 3.5 out of 5 stars in our review.

Alongside the TicPods 2 Pro are the TicPods 2, which sport the same audio specs and design, but don't feature noise cancellation or the ability to use voice commands or gestures to control your music.

TicMotion is the technology that allows you to control your music and calls by moving your head, thanks to built-in motion sensors – that means you can nod your head to accept a call, or shake to decline.

Not embarrassed by talking to yourself out loud? TicHear allows you to control your audio playback with your voice, without needing to use a wake word to summon your voice assistant of choice, whether that's Alexa, Google Assistant, or Siri.

For example, you can give commands like "play music" "previous song" or "hang up", giving you a quick way to manage your audio and phone calls. You also summon your voice assistant using a universal wake word if you prefer; simply say "Hey Tico" or long-press your earbud, and you're good to go.

Like the TicPods Free, both the  TicPods 2 and TicPods 2 Pro have stems that sit out of your ear that contain the battery and touch controls. You can run your finger along the one on the right to change the volume, plus you can double tap to skip a track or hold your finger for a few seconds to boot up your voice assistant and ask a question.

Those protruding stems are more than a little reminiscent of the Apple AirPods; Mobvoi has even got rid of the silicone eartips of their predecessors, opting for an Apple-esque fixed eartip design.

It's an interesting move, considering the lack of silicone eartips has long been a criticism of the Apple AirPods, something the company addressed with the AirPods Pro.

Unlike the AirPods, you'll be able to get both TicPod models in a range of colors, including navy, white, and light pink.