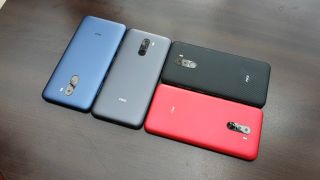 When it comes to smartphones or tech in general, there are few urban legends as well-known as the Poco F2. Following an entire year of silence and ambiguity, we might have just received our first official confirmation from a Pocophone official.

Pocophone is a Xiaomi sub-brand that was started in 2018 with a focus on well-priced gaming smartphones. The Poco F1 was its first (and only) smartphone, which brought flagship specifications to the sub Rs 30,000 segment, which no other brand was able to match during its launch. Expectedly, it was a runaway success in markets such as India, where specifications and price are the biggest variables to a purchase decision.

For reference, the Poco F1 was powered by the flagship Snapdragon 845 chipset with up to 8GB of RAM and 256GB of storage, making it a competitive gaming smartphone. There were some apparent corners cut in areas such as the display and cameras, but none that would hamper its value offering.

Eventually, it left consumers wanting for more, especially those who wished to high-end performance without entering the premium segment. Unfortunately, nothing was announced or even mentioned. In fact, there have been 0 official mentions of the Poco F2 in all of 2019, leading many to believe that the sub-brand was dead. These rumors gained more fuel when Jai Mani, the company spokesperson, parted ways with Pocophone.

The future of Pocophone?

However, in a seemingly desolate time, we might have just received our first official confirmation about Pocophone’s future. Alvin Tse, Head, Pocophone Global, recently engaged in a Twitter conversation. The reply, which was promptly deleted, read, “You will hear more from POCO in 2020 ♥️”.

It was the first time we saw any Xiaomi/Poco official mention Pocophone. While there’s no explicit mention of the Poco F2, it does confirm that the brand is here to stay. It also needs to be noted that Pocophone has had only one product in its entire life so that this tweet could imply the existence of the F2 or an entry into a new segment.