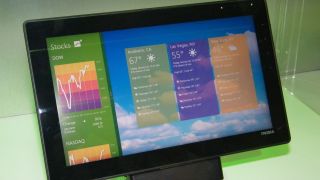 An app will let you experience Windows 8 on your iPad

A new app lets iPad users experience a Windows 8 tablet with the Metro UI right on their Apple device.

The Win8 Metro Testbed app comes from Splashtop, who has made numerous desktop streaming apps for both iOS and Android devices.

How to test drive Windows 8 on your tablet

First, it requires a PC with the Windows 8 Consumer Preview and Splashtop's free Streamer program installed.

Then, the desktop's audio and video is streamed over Wi-Fi to iPads through the app at 60 frames per second.

The app recognizes the native touch screen gestures of a Windows 8 tablet, such as swiping left and right to change apps or open the Charms menu.

Additionally, pulling down from the top of the screen closes an application. And swiping slowly across the screen can allow two apps to run side by side.

The Win8 Metro Testbed app does include some limitations such as the lack of iPad camera support.

It also runs at the native resolution of the iPad 2 by default - 1024 x 768 pixels - and must be adjusted to allow features like running two applications side-by-side.

With no Windows 8 tablets available until later in the year, the app is the closest we're likely to get to a Metro UI tablet for a while. The app is available now through the iTunes app store for $24.99.