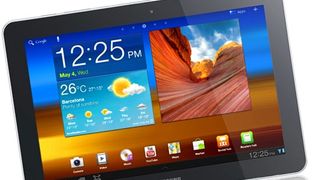 Former Apple CEO John Sculley has insisted that only Samsung's Galaxy Tabs provide any serious competition to the new iPad 3.

Sculley, who was brought into Apple from Pepsi by Steve Jobs after masterminding the beverage company's rise on Coca Cola's coat tails, left Apple in 1993 under something of a cloud.

However, the man behind the famed Pepsi Challenge remains an Apple fan, and he has only found a single company worth considering a rival for the tablet market.

Sculley: "The only serious tablet competitor in sight to the iPad at this time is Samsung's Galaxy.

"I predict many good years ahead for Apple," Sculley told the Economic Times. "The only serious tablet competitor in sight to the iPad at this time is Samsung's Galaxy.

"We know the landscape can change quickly but Apple has an extraordinary executive team.

"Companies like Sony are trying to deal with the challenges of the legacy businesses (like the money losing television unit) while Apple is riding a wave and can focus all its talent on the future."

Jobs relationship with Sculley was an interesting facet of the former being pushed out of Apple, before his triumphant return years later.

Sculley famously licensed Apple's user interface to Microsoft for Windows 1.0, before wading into a legal battle around Windows 2.0 that ended up in the courts.