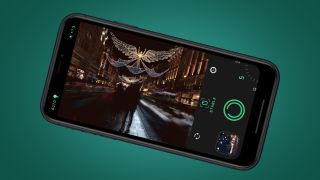 Apple's annual 'best apps and games' awards are always a handy guide to the ones you should be playing around with at Christmas – and following the crowning of Prisma, Calm and Procreate in the past few years, Apple has named the long exposure photography app Spectre Camera ($2.99 / £2.99 / AU$4.49) as its favorite iPhone app of 2019.

Why did it win? Well, long exposure photos – think rivers of car headlights and wispy waterfalls – have traditionally involved the slightly less attractive process of using tripods, filters and shutter releases. Instead, Spectre applies a nifty computational twist on the technique to simplify it for point-and-shoot iPhones (and sadly for Android users, only for iPhones right now).

The trouble is, long exposure photos remain a tricky thing to pull off, even with Spectre’s considerable help. You can't just point your iPhone at a scene and expect dreamy, award-winning results. So we spoke to Sebastiaan de With, co-founder of Spectre and its sister app Halide, to get some insider tips on how to create some spectacular festive photos using the iPhone app, without the blurry results that troubled its early adopters.

Before we get into the tips and tricks, it’s useful to know how Spectre differs from similar apps. Typically, both cameras and apps have created the long exposure effect by using long shutter speeds of several seconds. Hence the need for a tripod or ND filter to prevent camera shake and overexposure when shooting in daylight.

But Spectre employs a computational technique that’s similar to the likes of Apple's Smart HDR to help overcome your IPhone's physical limitations, like small sensor size and limited shutter speeds. As Sebastiaan de With told us: “Phones can’t actually take photos for five seconds, so we thought we’d ‘cheat’ a bit: we take hundreds of fast photos, which are also sharper, and then blend them together with some AI that compensates for the natural movement in your hand and arm.”

Like many HDR modes, you then get a mix of all these snaps. “The resulting image is a composite of all those photos we take," says de With. "And since we save it as a Live Photo, you even get a little video of the exposure as it happens.”

But it’s not quite as simple as that. Early users of Spectre found that their results were often blurry, and the app’s initial App Store reviews weren’t exactly glowing. “Yes, we also saw this,’” admits de With. “The reason is actually pretty simple. Taking so many photos is very hard on older iPhones. We thought we’d still accommodate users of older iPhones by telling them to use a tripod, but this didn’t really communicate well to users.”

The solution was to figure out a way to help stabilize older iPhones. “We went back to work nights and weekends to find a way to add our AI stabilization to older phones, at the expense of image size,” says de With. “We now offer it on older phones too, that’s why the reviews got a lot better. Lessons were learned.”

Indeed, Spectre's stabilization now works on iPhones going back as far as the iPhone 7, 6S and SE users. Fancy giving it a spin? Here are five tips from the app's co-founder, Sebastiaan de With:

Spectre’s computational photo-crunching naturally doesn't completely negate the need for some technical and compositional knowledge. So here are Sebastiaan de With’s top five tips for making sure you get great results to show off to the relations this Christmas:

Today's phone cameras might be capable of photographic wizardry, but you do still need to lend them a helping hand. “It’s important to remember that Spectre’s A.I stabilization is not a magic tripod: you do have to hold your phone steady,” says de With. “And while we can compensate for a lot of movement – I have taken nice shots on moving boats, bridges that were swaying, windy days and more – you do have to keep the phone steady.”

If your shots keep turning out blurry, de With has a couple of tips. “First, disable our AI-based scene detection by tapping the lightbulb above and turning “off” light trails. Light trails are used at night and require a much steadier device.”

And if that doesn’t work, then you’ll need to try the good, old-fashioned approach. “If shots keep coming out blurry, it might require you to stabilize your iPhone by putting it on something like a table or a ledge when it takes the photo.”

2) Use the exposure slider

While its interface might be a bit too simplistic for some, Spectre benefits from many of the neat design touches seen in its sister app, Halide, which we've named as one of the best iPhone apps we've used in 2019.

One of these is the exposure slider, which is available anywhere in the app rather in a fixed control. "You can swipe anywhere on the screen in Spectre to make the image lighter or darker. It’s one of those things that’s super nice when you are fiddling with keeping the phone steady; it saves you poking it with your hands or looking for a slider," says de With.

This is particularly useful when shooting cities at night, because the intensity of artificial light and hand-shake can easily lead to blown or blurry highlights. If you're finding this, try bringing the exposure down by sliding your thumb down the screen.

Another benefit of Spectre’s computational approach, compared to a traditional long exposure, is that you have more than one frame to choose from.

So if you’re still having issues with image blur, then using the Live Photo is an option. “Since it’s a Live Photo, you can often tap ‘Edit’ in Photos, go back to the last Live Photo frame that was sharp, and save it as that.”

To do this, press the 'edit' button in the top right corner of the Photos app, then press the Live Photos symbol (concentric circles) on the left. Scroll through the frame then choose 'Make Key Photo'.

The three main long exposure effects you can create with Spectre are silky water, light trails and blurring moving people in busy scenes.

For the latter, it’s best to have a focal point for the action to move around. “Ask someone to stand still in a crowded place - very still! - and then take a photo of people moving around them," says de With.

"If you keep the shutter speed lower (3 or 5 seconds) the people don’t fully ‘disappear’, and you get the effect of busy crowds blurring or ghostly images," he adds.

Long exposures are mostly used to introduce motion effects or light trails, but Spectre's extra dash of computational trickery means you can also use it to remove moving subjects entirely. With a bit of practice, this can help you recreate deserted, 28 Days Later-style city scenes.

"Another thing I love to do is to make traffic vanish on highways. You can see your city in a whole new light by going to an overpass or busy intersection in the day when traffic is moving at a good clip and using the 9-second time," says de With.

One of the few manual controls in Spectre is 'exposure time' in the app's bottom right-hand corner, which is more a guide to the effect it'll create rather than actual shutter speeds. This is where you'll find the the '9-second time', alongside 5-second and 3-second options. To make traffic or people disappear, make sure the light trails options is switched off too.