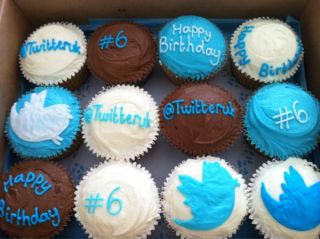 Happy birthday dear Twitter, where would we be without you?

Remember on kids' TV when mums and nans could send in lovingly hand-crafted cards for the birthday shout out segment?

Imagine that's what's happening right now, for not only is it the sixth anniversary of the first ever tweet, but the man who used the first smiley, Scott Fahlman, is 21! Again! :-)

And if you think that was tenuously related to tech, just you wait:

Go Twitter, it's your birthday - Unlike 50 Cent's friend, it actually is Twitter's birthday, but it's only six, so not really old enough to be in a club let alone drinking Bacardi and not giving @!*$s. Also it's a website. Fiddy is yet to offer his birthday wishes. [Twitter]

Death to periscopes – Since X-ray vision is taking its sweet time to hit the mainstream, a group of scientists have hedged their bets with a new camera that can see round corners using lasers. That's right, we said lasers. It then creates a 3D model within 15 millionths of a second. It's a little bit blobby, but c'mon! Lasers! [USA Today]

Background noise – A patent filed by Google suggests it may one day suck up the background noise of your phone calls and spit out a relevant advert if it can tell you're at a concert or a sporting event or something. Yeah, that's not intrusive. Our privacy wouldn't feel violated by that at all. [Geekwire]

The Very Hungry Games – There's this new film you might have heard of, The Hunger Games? It's like Twilight but not about sparkly vampires. We don't really know much about it but Microsoft has done a website for it, working with Lionsgate's FX team and using some "game-changing" HTML5 shenanigans. Of course, you don't have to use IE9 to visit http://thecapitoltour.pn/ but Microsoft will hunt you down and [threatening film reference] you if you don't. [Microsoft]

This has nothing to do with tech – Sometimes things happen that are interesting but aren't really related to technology. Just go with it, it's fine. This tickled the TechRadar news team today: Michael Bay's The Dark Knight, by Michael Bay. [Twitter]

Bird brain – A man, name of Jarno Smeets, may or may not have made some wings that use a couple of Wii controllers and an HTC handset to transform the inelegant flapping of his arms into the slightly less inelegant flapping of the giant wings. He filmed it with a GoPro camera on his helmet. But this may all be a sham to get your to buy a Wii or a GoPro camera or an HTC phone. We can't be sure. Don't buy any of them, just to be safe. [The Register]

Apple Sourz – A leaked email apparently from Microsoft's sales and marketing group suggests that the company has put a ban on buying Apple Macs and iPads using company funds. No doubt Bill Flora, designer of the Metro UI whose desk is littered with Apple goodies, is gutted. [ZDNet]

Pass the acid – The Beatles' animated film, Yellow Submarine, is finally to get a DVD and Blu-ray release on May 28, and it's had a Ultra HD digital makeover to celebrate. For a special treat, each frame was hand-restored. Unfortunately, there's no way to watch it in Ultra HD yet. But still, it's good to be prepared. [The Beatles]