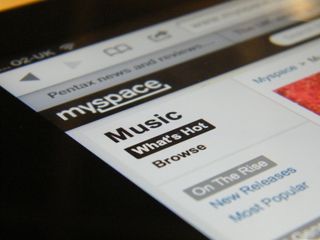 What would Tom say?

MySpace's standing as a social network has been shaky for some time now but some figures commissioned by TechRadar show that the site is down but not out as its musical reinvention takes hold.

It's the social network element that's throwing us all off – we're used to thinking of MySpace as the precursor to Facebook and when you compare its figures to Zuckerberg's behemoth it doesn't look too healthy.

According to Experian Hitwise, MySpace receives over 7 million visits a month in the UK (in the US, it's around 40 million) – sounds big, but it's small fry compared to Facebook's one-billion-plus UK visits (over 6 billion in the US).

But MySpace has new owners and it's looking in a new direction – forget social, it wants to be a music and entertainment hub, streaming music and video and providing artist pages and radio stations.

So why don't we look at MySpace in those terms? We worked with Experian Hitwise to look at MySpace's traffic compared to music and video sites to see where it sits in the entertainment ecosystem.

In the UK, MySpace now comes out as the top music site (at least among the sites we looked at). Of all the visits to 11 major music sites, MySpace took 29.25%, followed closely by Soundcloud which takes 28.17%.

Last.fm comes in fourth behind Grooveshark, and Soundcloud for mobile brings up the rear of the top five.

A couple of caveats to remember: measuring traffic to Spotify.com (which in the UK accounts for just shy of 4% of visits to music-related sites) doesn't give an accurate picture of how many people use Spotify to stream music.

Unfortunately, Spotify hasn't released exact figures for number of UK users it has – but for a service that has over 10 million active users worldwide, launched early in the UK, and is the overall number two digital service in Europe, after iTunes according to the IFPI Digital Music Report, it's definitely going to be up there.

And if you add Soundcloud web's 28.17% to the Soundcloud for Mobile figure, it overtakes MySpace with a total of 32.63%.

But compared to newcomers like Deezer and even established sites like Napster, MySpace is currently streets ahead.

The figures aren't perfect – in an ideal world we'd have included every possible music streaming site, be able to include Spotify's figures and made some allowance for those people sharing music through Facebook apps and the like – but the data collected by Experian Hitwise gives us a good indication that there's life in MySpace yet.

Figures from Experian Hitwise for February 2012, commissioned by TechRadar