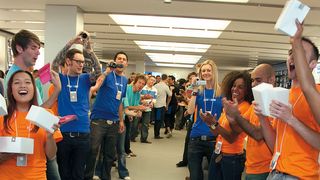 The experience of buying from an Apple Store is the exact opposite of PC World. There should be another way

One of my most valued possessions is my Fender Telecaster, which I bought second-hand more than 10 years ago.

It was a case of love at first sight, and the guy in the guitar shop knew it. He knew it because he was in love with it too.

That guitar, and every other one in the shop, was more than a finely turned piece of wood with some metal bits, electrical circuits and a sunburst paint job. It wasn't a thing. It was a key.

This guitar, I knew, would unlock my talent and fill me with the power of rock, taking me to the world's biggest stages where nubile lovelies would throw their pants and telephone numbers at me. It would kick-start my creativity, enabling me to create the sort of music that people with goatee beards write essays about, and it would make my life awesome.

It didn't quite work out like that - as it turned out, the guitar just took me to endless smoky rehearsal rooms where I'd end up losing my rag and shouting "Just play the note!" - and it doesn't work out like that for most musicians.

Nevertheless, every single electric guitar is sold on the basis of that dream. Why aren't PCs? When you consider the amazing things PCs can do, the way they're sold is a tragedy.

Even the most corporate guitar shop tends to feel more like a cathedral than a commercial enterprise - where staff and shoppers are fellow travellers on the road to six-stringed nirvana. Maybe I've just been unlucky, but I haven't experienced that with PCs.

With a few exceptions, the typical PC retail experience is more akin to buying a fridge from a white goods warehouse. You have the same aisles of barely differentiated products with confusing and hard-to-price-check model numbers, plastered with stickers you may or may not understand.

It's the same online, too. Buying a PC online often feels like you're playing the world's worst text adventure. Do you want the new Argonomicon 15, or the Mongrolodian F2? Would you sacrifice a half-gig of RAM if it meant getting the F9321A processor instead of the F32321?

At least with text adventures you eventually get to kill somebody. It's all about specs. Shouldn't it be about sex? I don't mean sex in the horrible, local newspaper advert "Sex! Aha, made you look! Buy a fridge!" sense. I mean in the sense of possibility, of excitement, of the sheer joy of doing amazing things that make everyone think you're amazing too.

Guitars are sold on that basis and PCs are not, and yet when I look at the charts the sexy music, the kind of music that sexy people like, is overwhelmingly made not on guitars, but on computers.

Every one a magic-powered joy machine

It's the same with other art forms. The most exciting area of publishing just now is electronic publishing, which revolves around Word documents. The most interesting video stuff is CGI. The most extraordinary gaming experiences are on PCs. PCs are turbo-charging creativity, shrinking the planet and delivering a constant stream of miracles that would have been unimaginable even a decade ago.

From the cheapest netbook to the fastest wallet-emptier, if you look at what PCs can do rather than what components are inside them, it's clear that every single one is a magic-powered joy machine. You know this. I know this. Why don't PC firms appear to know this?

Apple knows it, which is why it's one of the few computer firms doing impressive numbers. Personally I'm a bit put off by the happy-clappy Californian cult vibe of Apple Stores, but that doesn't mean I want buying a PC to feel like getting a loaf of bread in East Germany in 1954 either.

I've helped a bunch of people choose new laptops this month and in every case, it's been an exercise in mind-boggling tedium.

To use the sex analogy, if your partner spent the entire time saying "is it OK if I do this? Would you like me to do that? I could do this, or that, or that. Which would you prefer? How's that? Would you like the light back on? Is that nice?

Would it be nicer if I tried this? If you prefer I could do that. What do you think? Are you comfortable? Should I turn the heating down a bit?" you'd make them sleep in the shed.