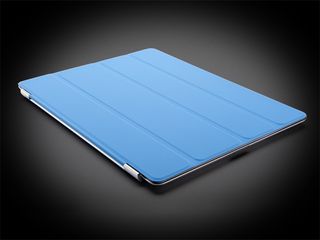 Apple iPad 2 owners looking to trade-in their tablet to fund an iPad 3 / iPad HD might have noticed their prized gadget is starting to look a little rough around the edges.

That's likely to be down to the undeniably cool £35 Smart Cover, which went on sale with the device last March, which did absolutely nothing to protect the edges or rear of the device.

New reports on Monday evening suggest that Apple is looking to rectify that by releasing a new-and-improved magnetic Smart Cover alongside the iPad 3 on Wednesday.

The new Smart Cover will include a "rear shell made from fiberglass covered with PU/bicast leather" according to Apple site iLounge.

The blog's reliable source says the case is similar to the Incase Magazine Jacket for iPad 2, which also protects the device's tapered edges.

The original Smart Cover, which went on sale in a number of colours worked well as a stand in a number of positions, while also automatically switching the display on and off when opened and closed.

For us, we felt it strange that Apple didn't launch an official case which protected the rear of the device in the first place and, for that matter, so did our battered iPad 2.