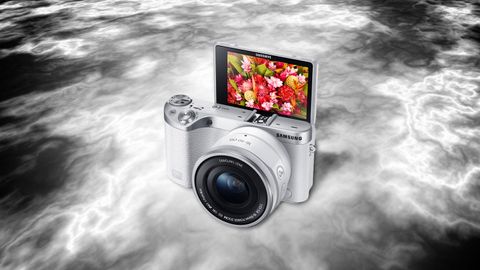 The NX500 has some great features and for the most part an excellent user interface as well as top-notch AMOLED screen. It's also capable of producing very high quality images. The only fly in the ointment is the lack of a viewfinder.

The Samsung NX1 that the NX500 is based on has the type of feature set that is designed to grab the attention of enthusiast photographers. For a start, its APS-C format CMOS sensor is backside-illuminated (BSI), which means that the photo receptors (pixels) can be made larger to improve their light gathering potential. What's more, the sensor has 28.2 million effective pixels, giving the NX1 the highest resolution of any APS-C format camera currently available.

Add to this the fact that there's a hybrid autofocus (AF) system with 205 phase detection points (153 cross type) and 209 contrast detection points, 4K video recording and a maximum continuous shooting rate of 15fps (frames per second) and you start to see what all the fuss is about.

Significantly, the NX500 has the same 28.2Mp APS-C format BSI sensor as the NX1, along with a slightly pared back version of the DRIMe V processing engine. This engine enables a maximum continuous shooting rate of 9fps for 40 JPEGs or 5 raw files (when a UHS-1 SD card is installed) before the rate slows. While this is slower than the NX1, it's still quite a lick and faster than most CSCs or DSLRs can manage at full resolution and with continuous autofocusing. Exposure is set at the start of the sequence, but that is unlikely to be an issue in most instances.

There's also the same hybrid AF system as is found in the NX1. And, as in the NX1, this combines with the processing engine to enable the inclusion of Samsung Auto Shot (SAS) mode with its rather unusual Baseball and Jump Shot mode, along with a new Trap Shot mode.

Baseball mode is designed to take a shot at the moment the ball hits the bat in a baseball game and in Jump Shot mode the camera takes a photograph when the subject is at the top of a jump. In Trap Shot mode the camera takes a photo when it detects the subject is moving in the direction of the on-screen arrow and it reaches a set point. As it requires the subject to move in a particular direction, it could be of rather limited use for shooting wildlife, but it could work well for running races and the like.

One key difference between the NX1 and the NX500 is that the NX500 doesn't have a viewfinder. However, the 3-inch, 1,036,000-dot Super AMOLED touch-sensitive screen on the back of the camera is the same. Again, this is mounted on a tilting bracket to make it easier to view from high or low angles when shooting landscape format images. It can be tipped right up to allow viewing from in front when shooting selfies.

Taking another leaf from the NX1's book, the NX500 can record Full HD (1920x1080), UHD (3840x2160) or 4K (4096x2160) video in MP4 format with HEVC compression. AVI format with MJPEG compression is used when recording VGA footage. The maximum bit rate for 4K recording is 36Mbps (at 24p), but 40Mbps is possible with UHD (at 30 or 25p) footage. Samsung claims that its HEVC codec enables high image quality despite these conservative bit rates.

Full HD footage can be recorded at 60, 50, 25 or 24p. Helpfully, it's possible to speed up or slow down the responsiveness of the AF system when shooting videos.

It's worth noting that there's a focal length conversion factor of around 1.68x (on top of the usual 1.5x caused by the APS-C format sensor) when shooting 4K video because the camera crops in to use 1:1 pixel recording rather than downsizing. While this means that composition changes if you switch from shooting stills to shooting 4K video, it should ensure higher quality movies than down-sampling.

Like most modern compact system cameras, the NX500 has Wi-Fi connectivity built-in, and as is becoming increasingly common there's NFC (near field communication), but it's also got Bluetooth connectivity that works with Android smart devices (not iOS). The advantage of using Bluetooth to connect to a smartphone is that there's less drain on the battery and after it has connected once, it will do it again automatically.