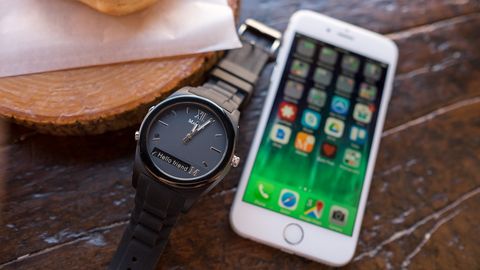 Attempting to be an analog watch with smartwatch features, this hybrid wearable makes too many compromises while not excelling in any way.

Smartwatches have gotten a lot better looking over the past year with new attractive models. Some devices even look the part of a traditional timepiece including the Moto 360 and LG G Watch R and Samsung Gear S. But if you're looking for something even more old school, Martian has created a set of wearables that integrates a mechanical clock face with an electronic display for notifications.

The Notifier sits on the low-end line of Martian smartwatches currently on sale at Best Buy for $99 (about £63, AU$117). At first glance it looks like a standard analog watch. But towards the bottom of the Notifier, there's a discreet OLED screen that lights up with scrolling notifications. The Notifier also has the ability to use voice commands - though it's not what you think. More on that later. The wearable also lacks a pedometer and many apps you can typically find on Android Wear devices.

The Martian Notifier has a style of its own, but let's see if it's enough to make this hybrid analog timepiece-smartwatch worth a purchase.

The Martian Notifier is on the chunkier side compared to other wearables I've slapped on my wrist. It's not quite as big as the Samsung Galaxy Gear S or the Puls Smartband, however with a 1.7-inch round face, it looks big even on my moderately sized wrist. It's also well on the thick side sitting half an inch (12.7mm) above your wrist, which makes taking off a heavy jacket in the winter a real chore.

Although the Notifier has such a large face, it's fairly barebones as an analog watch. For one, there's no second hand at all. The watch does not have a mechanical calendar either and it's missing several numerals at the bottom of the clock face to make room for the electronic screen. What's more, the lines for the 20 and 40 minute marks have been offset to accommodate the LED, which makes it practically useless for keeping time.

Thankfully the shortcomings of this just-for-show analog watch can be remedied by flicking on the OLED screen. You'll also be relying heavily on the electronic display to check the time because the only illuminated part of the watch are its two hands - making reading time in the dark nearly impossible. The good news is that the digital display is nice and clear to read even in bright sunlight.

As far as aesthetics, my Martian Notifier looks like an everyday - though extremely basic and inaccurate analog watch. My particular review unit came with a black frame and band, but the smartwatch is also available in other colors with a white or red face. You can also customize your watch by swapping out the default band by choosing one of Martian's many hued bands that range from red to violet.

Unfortunately, comfort is a huge (literal) sticking issue with the Notifier thanks to a thick, yet narrow plastic band. Worse yet, the inside edge of the band comes to a sharp corner that digs into your skin as you wear it.

While it's possible to replace the wrist strap with another standard 22mm watch band, it will stick out like a sore thumb. The band is attached to the Notifier by way of two long forks, which extend and dip below the watch's main body. By extension, Martian's bands are made with an extra bit of material to cover this gap, so any third-party strap you attach with look incredibly unseemly.