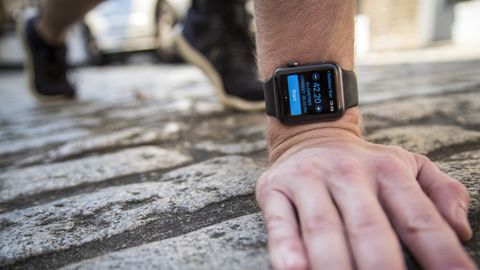 The Apple Watch 2 doesn't do anything mind-blowing, but tweaks in the right places make it a much more attractive option for prospective smartwatch owners than its predecessor.

It's almost a shame that it's limited to Apple users, as it's certainly one of, if not the, best smartwatch out there right now.

Almost every single upgrade offers something of tangible benefit: the GPS chip, the faster innards, the water-resistant frame.

Suddenly the Apple Watch is able to last longer and track you better, and even offers you the chance to get better at a new activity.

But it is expensive – so it's not a simple case of 'Got an iPhone? Buy this, post-haste!'.

What's in the box? Check out our unboxing video!

The Apple Watch 2 is a device that doesn't really fit anyone squarely. It's a good option for the 'more than idle, but not super-serious' fitness fan, or the 'I don't have a watch but I've got an iPhone and like the sound of this' user, but not perfect for either.

The ideal person for the Apple Watch 2 is someone who's on the go a lot, is constantly carrying things, and probably spends too much time looking at their phone when sat watching TV.

A person who's not averse to running or cycling, and perhaps – one day – dreams of doing a triathlon. A tech fan who likes the idea of being able to perform tasks in a new way – like firing a camera remotely with a group of friends, or paying for a coffee with their wrist.

It's hard to say that there's a perfect target user for the Apple Watch 2 – especially given the high price of ownership – but there are a lot of people who would get a lot of enjoyment out of it.

Should I buy it?

The fact that Apple has discontinued the Apple Watch 2 might put some people off though those with a keen eye for a bargain might see this as a good opportunity to get an Apple Watch on the cheap.

It was the original cost that prevented it being a strong buy, even though it doesn't feel like it's too expensive when you hold it and discover what it can do, and that might answer this criticism. But ultimately it's still more of a novelty than a necessity – the apps required from developers to make it the latter still aren't coming to pass.

If you're excited by the idea of what smartwatches can offer in terms of fitness and functionality, bringing out your phone fewer times in a day and making working out a simpler experience, then the Apple Watch 2 will be a great choice.

The convenience of being able to take a quick note through Siri, or fire the camera remotely, or flick through your music. None of this functionality is essential to your quality of life, but this watch adds an element of gloss to these everyday activities.

The Apple Watch Series 2 is the smartwatch we wish Apple had brought out when it launched the first Apple Watch. Well it was until we saw the Series 3.

If you're not convinced about the Apple Watch 2, then how about these instead? Now that both Samsung and Google support iOS with their operating systems, there are more choices than ever to supplement your iPhone.

If you're a fan of the Apple Watch but don't like the high price, then this could be the place to look. It's got many similar features and has been upgraded to include the same fast innards as the newer version too.

The main differences are: a lack of GPS and waterproofing, and the screen is a little darker compared to the newer version. If you can stand those changes (which, if you're not using the Watch for sport, you probably can) you'll do yourself a favor and  save some money here!

This is a new addition to the Apple world, as Samsung has only recently added iOS support to its range of smartwatches.

But with the large Super AMOLED screen, some good onboard sports tracking and a more traditional circular design, many could find something they like in the new Gear S3, even if it doesn't quite have the feature set that they'd get with a Galaxy phone.