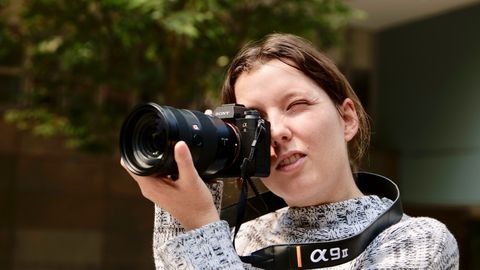 You’d be forgiven for thinking that the Sony Alpha A9 II is only an incremental update over it predecessor. However, every single one of the 43 little bits and bobs that are different about the A9 II make the new camera a much more compelling option for sports photographers and photojournalists over the older model.

Until May 2017, the kings of professional sports and press photography were two DSLRs – the Canon EOS 1D X Mark II and the Nikon D5. Then Sony launched the Alpha A9 and changed the game. Smaller, lighter and ridiculously fast, the original full-frame mirrorless sports shooter from Sony was one of the best snappers we had tested.

Fast forward to 2019 and the second generation A9 is on the market, trying to tempt the pros to upgrade. However, Sony has mostly held on to the core specs from the first-gen A9 and has chosen to make what, on paper, seems like only incremental upgrades to the A9 II. Those little tweaks may not mean much to the average user, but professionals in the field who rely on ridiculously quick turnovers and need high-speed performance will be the ones to appreciate what the Sony Alpha A9 II has to offer. It’s these users that the A9 line of cameras was designed for, and the latest model does not disappoint.

With so much that’s similar to the previous model, we’ve decided to list what’s great about the newer version in this review so as not to repeat ourselves. We’ve listed all the new features and then jumped straight to image quality so you can decide for yourself whether it’s worth the upgrade or not. That said, the A9 II costs a pretty penny (having launched with a price tag of $4,500 / £4,800 / AU$7,299) while the original A9 has seen a significant price drop. So, do the small changes make the Alpha A9 II a worthwhile purchase?

There’s a total of 43 features that are different in the Sony Alpha A9 II as compared to its predecessor, with only a few subtle physical differences that make the newer model an absolute pleasure to use.

One of those design changes is the larger and deeper grip that, even for those with small hands, makes the camera quite comfortable to hold and use for hours on end. The AF-ON button is now larger and more prominent, while the multi-selector joystick is now textured and thus more tactile, making it easier to find and use without taking your eye off the viewfinder.

While the drive dial remains unchanged from the A9, the exposure compensation dial on the top right corner of the camera now sports a locking button to prevent accidental changes. There's also a redesigned lens lock button on the A9 II, along with better padding for shock absorption around the lens mount. The camera also has better weather sealing than the older model, with double-sealed sliders for ports, the card slots, and battery compartment rather than just hinged seals.

However, the biggest advantage the A9 II has over its predecessor is the ability to shoot continuously twice as fast – using the mechanical shutter, the Mark II can capture up to 10 frames per second, making it a better shooter to use under certain artificial lights. In fact, for sports photographers shooting in indoor stadiums, there’s a new anti-flicker mode that detects fluorescent lighting and adjusts exposure accordingly. It's worth noting that the anti-flicker mode is not available while filming videos or when using the electronic shutter.

Design changes aside, it’s the improvements to the camera’s connectivity that really makes this shooter one of the best options for pros. The most important among them is the upgraded 1000BASE-T Ethernet port that is ten times faster than the 100MB/s terminal on the original A9 (we were able to transfer a batch of 300 JPEGs with a file size of about 11MB each in just under a minute and a half). Even the USB-C port is now the faster 3.2 Gen 1 standard, while the Wi-Fi supports both 2.4GHz and 5GHz as opposed to just the 2.4GHz in the original A9. These improvements in connectivity will allow photographers to transfer files directly to FTP servers quickly. Up to 10 different FTP settings can be saved to an SD card and reloaded onto the A9 II, while Sony’s Imaging Edge mobile app can save up to 20.

Another really cool feature that many photojournalists will be glad to use is the voice memo. Vocal instructions of up to 60 seconds in length can be recorded for individual images or a series of shots – a huge help for teams waiting back in the office to use the images wherever necessary. The memos can also be converted into text that get added to the JPEG file’s metadata, although this needs to be done on the Imaging Edge app.

A new low-vibration shutter design has improved image stabilization in the A9 II by half a stop, now rated at 5.5 stops. However, in real-world testing, we were hard pressed to tell the difference between the two iterations, with the A9’s IBIS still rather impressive.

Another tiny tweak that can go a long way is the slight improvement in battery life – where the A9 was rated for 650 shots when using the LCD display and 480 while using the viewfinder, the second generation shooter can manage to spit out up to 690 and 500 respectively.

Practically everything else has been inherited from the older camera and you can refer back to our in-depth Sony Alpha A9 review to find out more about the other features.

We were unable to test the camera in sports arenas as people weren’t comfortable with us publishing photographs of them on a public platform, so we tried the next best thing – wildlife. This kind of photography requires a fast and precise autofocus system, especially when taking photos of birds, and the A9 II did not disappoint.

The AF on the original A9 was practically perfect – fast and reliable in equal measure. At the time we thought it wasn’t possible to make it any better but, boy, were we wrong. All it took was a tiny tweak to the AF algorithm – made possible by the new Bionz X processor – to give the new camera’s autofocus performance a boost by improving subject tracking, even when using smaller apertures with Focus Priority switched on.

Tracking is precise and can keep up with erratically moving subjects as well (like birds flying and changing directions suddenly). The camera’s AF system does occasionally have trouble when the head of the subject disappears briefly and then reappears – we found that the AF system wasn’t able to lock back onto the subject’s head, but was more than capable of tracking the body.

Even when an obstacle gets in between the subject and the camera, the Sony A9 II is intelligent enough to know it needs to stay locked onto the main subject. In our case, this was demonstrated when we were photographing a tower of giraffes at Sydney’s Taronga Zoo. While we were focused on one animal, another ambled past between us and the giraffe we were shooting, and the A9 II didn’t even blink, staying locked on to our main subject.

The biggest improvement to the AF system, though, is the addition of real-time eye-detect autofocus when recording 4K video, something that’s missing in the older A9 model.

A few other tiny tweaks have been made to the AF system as well, including adding the ability to move the focus frame even when the shutter or the AF-ON button is half-pressed. You can also change the color of the focus frame to whatever catches your fancy. If you prefer using the rear LCD for touch-tracking, you can do so even when using the viewfinder to shoot.

Like its predecessor, the A9 II delivers some superb results. The 24.2MP sensor delivers images that are sharp, with great colors and plenty of details. However, RAW files have more chroma (color) noise as compared to JPEGs due to the camera’s high rate of calculations, but nothing that can’t be fixed during post processing.

ISO performance is excellent with virtually no noise at the lower values and very acceptable levels when you climb up to 12,800 and 25,600, as seen in the below image of a bird in the water.

The above shot was taken at ISO 12,800 and then cropped down by 20%. The uncropped image barely showed signs of luminance, with some grain visible only after cropping to zoom in closer to the subject. While noise becomes evident at 51,200 and higher, you should still be fine taking it up to 102,400 although we’d advise going that high only if you absolutely have to and if you’re shooting JPEGs.

The A9 II does have a decent dynamic range, although it’s still not quite a match for Sony’s megapixel monsters, but that’s only because the A7R series was designed for landscape photography. The A9 II holds its own when compared to the Canon EOS 1D X Mark II and the Nikon D5 (the latter is marvelous in low light), and plenty of details can be extracted from shadows when working on your shots later, even when just using a slider in the most basic photo editing apps.

The A9 II was designed specifically with the photojournalist in mind. For the average user, this camera will likely be overkill, with most of the new features going unused and under-appreciated. For the target audience though, this is one heck of an upgrade over the original A9. It feels a lot more refined and a far more efficient tool for photographers in the field.

Our only complaint would be the absence of XQD or CFexpress card slots that would see files saved to card much quicker, and the limited touchscreen functionality – both of which remain the same as in the A9. Other than adding real-time eye-AF to 4K video recording, no other improvements have been made for shooting movies. There’s still no S-Log support and the camera can only record 8-bit 4:2:0 video internally. The only way to output 8-bit 4:2:2 video is externally via the micro HDMI port.

However, Sony has released some very good long lenses that weren’t available when the A9 launched in 2017, making the A9 II a very compelling sports camera, despite the competition it’s likely going to have from the Canon EOS 1D X Mark III and the Nikon D6.

Canon’s latest sports DSLR has plenty to offer, including a higher continuous shooting speed of 16fps when using the mechanical shutter (as opposed to the A9 II’s 10fps burst). For anyone keen on capturing video, Canon has made this an ideal hybrid shooter, with C-Log 4:2:2 10-bit in-camera recording. While we’re yet to test this new camera fully, it’s shaping up to be a formidable competitor.

While we wait for the Nikon D6 to make its official debut, the D5 is still the low-light king amongst sports cameras, with an extended ISO range that goes up to a staggering 3,280,000 still not found in any other shooter. While its 173 AF points might seem a tad dated right now, its AF performance is still topnotch. So until we know more about the D6, this would be a superb choice for a sports DSLR.

It would be remiss of us if we didn't include the game-changing sports mirrorless shooter here. The original A9 is still a very impressive camera – after all, the second generation model is based mostly on this snapper. And with a significant price drop since the launch of the Mark II, the A9 is a compelling choice for those without the spare change for the more expensive newer pro-level sports shooters.