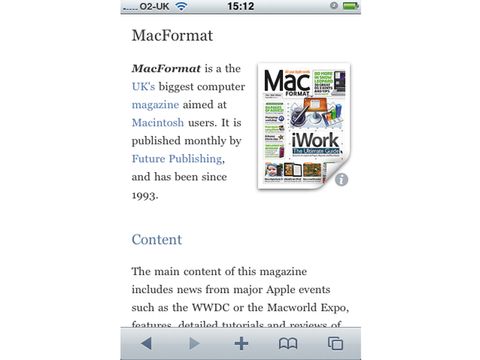 If you use Wikipedia on the go, then this iPhone app will come in most useful

A jewel of an app; we can't wait to try the iPad version

Most of the negative reviews on the App Store make the point that you 'can do the same thing for free' with Safari. But even though you can indeed browse Wikipedia on your iPhone – even to the extent of using the built-in feature of adding a specific site shortcut to your Home screen – that's missing the point.

Articles takes everything that's great about Safari as a way to access Wikipedia on the go and improves on them all.

For starters, everything is prettier. The developer has done a cracking job on the stylesheet for text and tables; everything looks great on the iPhone's small screen. However, it's still a sub-optimal way to view some complex documents, but it's cleaner and more attractive than Safari.

The double-tap-and-scroll trick to skip between sections in long articles is a clever solution, but we'd like to see section headers pop up so it's easier to see where you are.

It's not just aesthetics that are improved; Articles also makes it easier to interact with content. We like the way that the 'vital statistics' summary box's many pages are hidden behind a primary image, with an 'i' under a page curl prompting you to tap.

Specific pages can be bookmarked in folders that you create, and recently viewed pages are cached so you can view them offline. And even finding articles is easier than with the web view, thanks to a Title/ Content button and autocomplete. Plus it can geolocate you to suggest articles for things around you, which is great for travelling.

If you only dip into Wikipedia on iPhone once a month, then maybe this modest investment isn't worthwhile given how capable the mobile version of the site is, but we think it's a small price to pay. There's an iPad version coming out too…