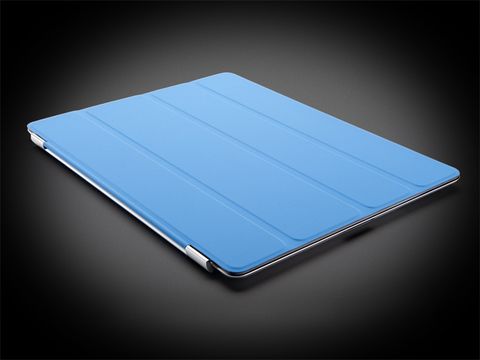 The magnets inside the smart cover and the iPad 2 align, so you can't put it on wrong

The Apple Smart Cover is aptly named: it looks great, and the way it works is so clever that we can't think of a better way to describe it.

It's got smooth polyurethane or leather on the outside. We prefer the £35 polyurethane version, which comes in brighter colours: blue, green, orange, pink or matte grey. The £59 leather version comes in more muted, 'executive' colours of tan, black, navy, off-white and red.

Apple claims the microfibre lining keeps your screen clean, but it really doesn't move around enough to wipe fingerprints away.

Magnets in the hinge keep it attached to the iPad 2, and only the iPad 2 (iPad 1 owners aren't invited to this party). It auto-aligns with magnets in the iPad 2's frame, so it's impossible to put it on incorrectly.

Another magnet sleeps your iPad when the cover closes, and automatically wakes it up when you open it, so there's no need to press the Sleep/Wake button.

You can lift the iPad 2 by the Smart Cover as long as you do so gently. To remove it completely, just be a bit firmer. The cover folds back into a triangular shape (also held together by magnets), which works great as a stand in landscape mode. It can hold the iPad at a comfortable angle for typing, or upright for watching videos.

The typing angle is quite stable, but when it's upright and you tap an on-screen button, it does wobble a bit, albeit less than last year's £31 Apple iPad Case.

The Smart Cover keeps the iPad upright in portrait orientation, but it feels a little less stable than in landscape.

Our main complaint is the price, which seems a little on the steep side. It comes in at £35 for the polyurethane version and £59 for the leather option. And it only covers the screen, not the whole iPad, although that also keeps everything slim.