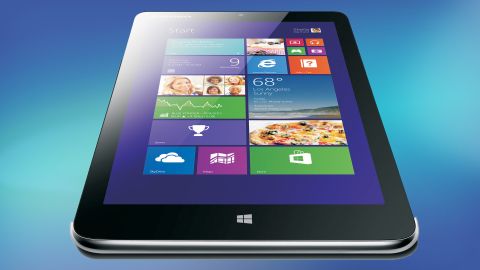 The Miix 2 hasn't the best performance levels, but as long as you don't expect too much, it will serve most needs.

There's a long-term trend in technology for each generation of new tech to be bigger and more feature-packed than the last. But tablet PCs such as the Lenovo Miix 2 8 resolutely buck that trend. In some ways spurred on by the success of the iPad mini, manufacturers are looking to make smaller devices than previous generations, with 8-inch screens appearing to be the sweet spot.

In many ways this makes a lot of sense. Larger screens such as those found on the Samsung Galaxy Note Pro 12.2 or the Sony Xperia Tablet Z are excellent for watching films and playing games on, but tablets with smaller screens – and therefore smaller overall body size and weight – have proven to be much more comfortable to hold, easier to carry and generally more convenient for day-to-day tasks.

Apple isn't the only company to find success with the smaller tablet form factor either. The Google Nexus 7 has proven to be a wonderful small-sized tablet, while both Amazon's Kindle Fire HDX 7 and LG's G Pad 8.3 are testament to the fact that small screen tablets can be highly desirable devices.

However, in all of these 7- and 8-inch success stories there is one glaring omission: Windows. Apple iOS and the open source Android mobile operating system are both well represented, but tablets runningWindows 8.1 or the more mobile-friendly Windows RT haven't enjoyed such a good hit rate.

That's where the Lenovo Miix 2 8 comes in.

That's not to say that 8-inch Windows 8 devices don't exist – recently we had our hands on the Acer Iconia W4 and the Toshiba Encore, to name just two. The Acer Iconia W4 is certainly a solid tablet, but it didn't really wow us, and it has yet to capture the imagination of potential users – a fate shared by many small form Windows 8 tablets.

The stage is set, then, for the Lenovo Miix 2 8 to really prove Windows 8.1's worth as a mobile, touch-friendly and versatile operating system for small screens. A lot might seem to be riding on the Lenovo Miix 2 8's success, but the rewards are high if this little tablet succeeds.