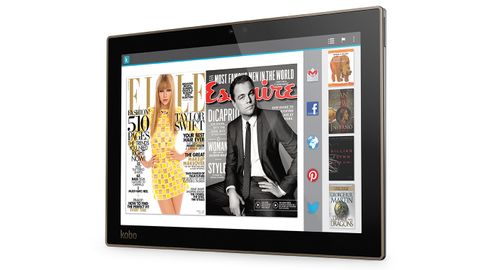 The Arc 10HD is running Kobo-customised Android, Reading Life. The level of customization is mild: Kobo hasn't forced its own brand of user experience on us, and we thank it for that. The closer to stock Android, the better.

Standard Android options such as wallpapers and keyboards are still available. The Android customization relates largely to the layout of the home screen and the two secondary screens, which are used for easy access to the Kobo store and your library. Unfortunately, the store and library can't customized.

There are some more subtle additions such as Reading Mode, which lets users set optimum reading settings, and can be turned on from the quick settings menu.

This is essentially an optimum reading setting that has been built into the UI. It will dim the brightness and stop the tablet going into sleep mode. These options are also available within the Kobo reading app, but it's good to have them available for other activities.

There's also Miracast, which lets users wirelessly stream video and audio to a compatible device, a feature that is similar to Apple's AirPlay. But you'll need a compatible smart TV or audio system like Sonos to properly test this out.

Everything else is standard Android and whether you're familiar with Android or not, it's incredibly straightforward to use. It seems that Kobo has considered entry-level android users when designing the custom Reading Life UI.

All Kobo devices revolve around an optimized reading experience and that's why the Arc 10HD's secondary screens relate solely to the bookstore and library.

Despite the powerful processor and good amount of RAM under the hood, there's still a bit of lag when gliding around the menu. This is probably due to the processing power that has been gobbled up by the high-resolution screen. It's not game changing, but it's noticeable enough to irk you on occasion. It only occurs when you open or close an application and the animation isn't as smooth as it should be.

Even though there is some mild lag, the Arc 10HD performs reasonably well under pressure and when multitasking.

I ran the Napster music app whilst playing NBA 2K14 with no problems. But when I quickly switched out of the game and opened an issue of Forbes magazine, the music began stuttering and the Napster app ultimately forced a close.

It's also noticeable that when the Arc 10HD boots up or comes out of sleep, it doesn't automatically connect to Wi-Fi - not ideal. You won't have to enter your Wi-Fi password every time, but you will have to manually connect to the Wi-Fi, which is very bothersome. Kobo needs to release a software patch to sort this out.

Music, books, games and apps can be purchased through the Google Play store. The experience will feel familiar to longstanding Android users.

Kobo also has its own store that is focused on books and magazines - with around 3.5 million titles, it comes in at around 2 million more than the Amazon store. This can be accessed either from one of the second home screens or the Kobo store app in the app menu.

The Kobo store has a few issues. It's a bit slow and there's a longer-than-normal wait when flicking between categories and menus. Oddly, the pricing is in US dollars, even though I was using the Arc 10HD in the UK for this review. I couldn't find a way to change this.

Other than that, buying media is very straightforward and all bought content is downloaded to your library, which is available from one of the home screens.

Content is nicely laid out and the store is easy to navigate. It actually looks very similar to the Netflix browser page, with content in side-scrolling rows and categories based on your reading history. Helpfully, the store shows the compatible devices for each item before you make your purchase, so you won't end up buying media you can't view.

One thing that the Kindle store has and Kobo lacks is a wish list option, allowing you to save titles for purchase later. It's a shame because the Kobo store has such a breadth of content, it's entirely likely that you'll see things you want to come back for.

Just like the Kindle store, purchases are held on the cloud and available to download when you please.

Your personal library presents all of your content as large thumbnails in a continuous list. If you have only a handful of titles, it looks quite nice. But if you have hundreds, it could become a chore looking for a specific title. There's more categorization in the third home screen, but you can't change Kobo's preset options.

In terms of software performance, the Arc 10HD fares well as an eReader. The Reading Mode option is a clever idea and magazines really benefit from the sharp screen.

The reading extras such as public notes, annotations and highlighting are all available as they are on other Kobo devices. Facebook sharing is also available, but as we've remarked in previous Kobo reviews, this is a bit of a pointless feature to Kobo's target market.

An interesting feature that Kobo recently launched is the Beyond the Book app that gives you information on key protagonists and background on the author. A nice addition for some extra reading.

Although the reading software is well implemented as you would expect from Kobo, the reality of actually reading a book on a 627g device is a different story.

A 10-inch tablet is too large to hold in your hands for any extended period of time and it doesn't feel very personal. If you're using this on public transport it can be a little like some sort of group reading exercise with the person next to you.

With less in-depth publications like magazines, it works perfectly because you're not going to be holding the tablet for two hours, and high-resolution images look excellent on the high-quality screen.

Films, too, benefit from the high-quality screen, but unfortunately they can't be purchased from the Kobo store.

Streaming on Netflix, or running a movie directly from the HDD, looks excellent and is probably the main reason you would use this device, especially since you can rest the tablet on your lap or on a surface to watch a film.