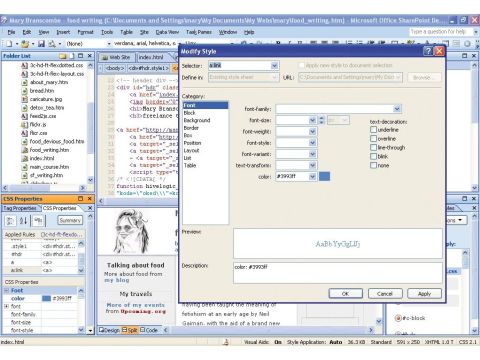 Microsoft SharePoint Designer may look like FrontPage - which it replaces in Office - but the resemblance is only a little more than skin deep.

SharePoint is based on IIS, ASP.NET 2 master pages, web parts, CSS and data source controls, so it's still suitable for general web development - but Microsoft is pushing Expression Web for that.

It still has the split code and design view, tag navigator, IntelliSense, tag completion, code snippets and comprehensive reports. CSS is handled well, with visual style tools created when you apply formatting directly. You're not restricted to SharePoint or FrontPage Server Extensions for data-driven sites, you can use XML and OLEDB databases via ASP.NET.

When you're building a SharePoint site, the Workflow Designer can build workflows for SharePoint document libraries. Rather than writing .NET code for Workflow Foundation, it lists graphically.

SharePoint Designer is a competent web design tool that's specialised for SharePoint, but it sticks to modern web design rules which may be too complex for amateur developers. However, SharePoint developers still get good tools for designing sites and applications.