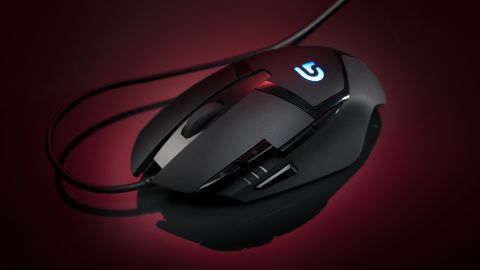 A formidable replacement to a staple gaming mouse, the Logitech G402 is a comfortable, precise peripheral with a bit of a bragging problem.

If there's any company that understands Darwin's theory of evolution, it's Logitech. The industrial design team there is relentless in its pursuit of a better gaming mouse. The latest fruit of their labor? The Logitech G402 Hyperion Fury, a wired gaming mouse with a serious speeding problem.

The G402 is special in the sense that its sensor can track upwards of 420 inches per second. Think about that for a moment. Four hundred and twenty inches in the matter of one second.

That's 35 feet – from the end zone to the 11-yard-line on a football field – in the time it takes for you to stand up. Unless you have a comically large desk, this may sound like overkill, but it might make some sense when you look at a PC gamer's first-person shooter settings.

There's a school of thought when it comes to first-person shooters that a lower sensitivity used in tangent with a high-speed sensor can make a player more accurate.

We could get into theoreticals here involving how large an average gamer's mouse pad is, at what speed they can accurately control their mouse, and how much a mouse's acceleration factors into the equation. But to save you that headache, know that, even if you used a 40-inch mousepad and moved at a crazy quick 4.5 m/s (177 inches), the G402 could handle it.

During testing, the fastest I could physically get the mouse to move was 90 inches per second. This, I kid you not, had me whipping the mouse from one end of the screen to the other without stopping.

The optical sensor is so powerful that I could have effectively doubled the size of the 40-inch mousepad and doubled the speed at which I moved my hand and, even then, the G402 could take it. Like the insanely inflated 12,000 dpi range in the Logitech G502 Proteus Core, this level of speed tracking is absolutely unnecessary. Thankfully, the G402 stands just fine by itself, ludicrous sensor or not.

Aesthetically, there's a lot to like about the G402's more angular design direction. It's a mix of jutting plastic (see: left- and right-click buttons) and curvaceous rubber padding that feels downright wonderful to use.

Look past the pulsating blue "G", and you'll notice it's slightly longer than the SteelSeries Sensei Wireless. If that sounds uncomfortable, don't worry! It's anything but. The G402 makes hands of all shapes and sizes feel at home instantly. It's locked in at a moderately light 108g, without accounting for the cable. The mouse sports four macro buttons that sit on the left side of the mouse, two in thumb's reach and two – G7 and G8 – in the pointer finger's domain.

The G402 also lifts the incredibly useful "dpi Shift" button, from this year's iteration of the Logitech G502, that allows up to four different dpi settings (with a range of 250 to about 4,000 counts per inch), but replaces the dual mode scroll-wheel with a simpler, smaller, rubber scroll-wheel. The wheel doesn't lose that finger-pleasing, tactile click between each notch, but, admittedly, it does feel like the weakest spot on the mouse.

Sometimes, finding the right accompanying software can be an uphill battle. (Roccat Kone Pure Military, I'm looking at you.) Setting up the G402, without a doubt, is not that way.

Basic functionality is plug-and-play (yes, even on Mac OS X), but only Windows users can get their hands on the Logitech Gaming Software. Inside, you'll find options to customize macro buttons – including multi-keystrokes – change LED settings, and set dpi levels.

My only gripe is that the software doesn't have a built-in game library like some other peripheral manufacturers provide, making it a huge time-sink to remember your most-used commands and manually program them into the software.

Worse, Logitech Gaming Software doesn't allow you to customize the more minute details like lift distance, angle snapping, acceleration, sensor alignment or change the LED to any color other than blue.

The 32-bit processor and on-board storage makes the Logitech G402 a killer contender in the perpetual peripheral arms race, and while there are not enough macros for most MMO players out there, the Hyperion Fury packs more than enough firing power for first-person shooter fanatics.

The Logitech Gaming Software isn't the best I've seen, and the greater-than-420 ips sensor isn't much more than a gimmick. But, despite a few foibles, this mouse's outstanding build quality and unfathomably low price tag ($59.99, £49, about AU$64) was more than enough to win me over in the end.