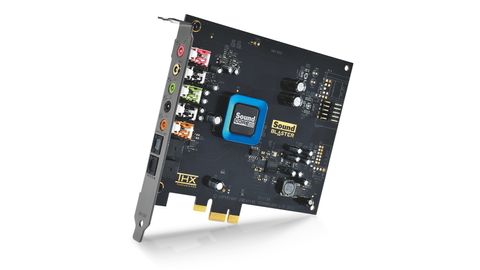 Doesn't deliver what we'd hoped for from a new Creative card. Good, but too pricey.

A new departure in sound cards for the Creative Sound Blaster Recond3D PCIe, with no X-Fi in sight.

It seems like many years since a sound card from Creative that didn't bear the X-Fi logo passed through our labs, mainly because it has been many years such such an event. The Recon3D PCIe is a complete break from the past, however, with a new processor, branding and software suite to drive it all.

At its heart is the SoundCore 3D chip, which we've seen in USB products and on motherboards, but not in an add-in card yet.

Creative describes it as a quad-core digital signal processor (DSP) and high-quality converter squeezed onto a single chip, but you'll see it as a collection of familiar Creative technologies like TXH TruStudio Pro and a Crystaliser which started out as part of the X-Fi suite.

It does, however, make for a fairly spartan board in terms of secondary components. Does that mean it lacks audio oomph?

The few components on board the Recon3D are hard to identify – there's the SoundCore 3D part, obviously, and a flashable firmware chip, but nothing like swappable op amps on board.

Some might worry about the lack of 7.1 outputs too, but the key appeal is a dedicated headphone amp capable of driving 600ohm headsets.

Plus, THX TruStudio has a good reputation for position effects behind it – this should be good for gaming.

Can you do it all in a DSP?

That seems to be the tack taken by Creative with the Recon3D range, but when its a little more expensive than the older Creative X-Fi Titanium or Asus Xonar DX - both excellent gaming cards with good music performance to boot – it's got to do something special to stand out.

A headphone amp is a big step forward, and using the dedicated headphone jack certainly makes things very loud. But in honesty, as far as gaming goes, it's hard to tell the difference between this and the bargainous Asus Xonar DG, which remains an all time favourite.

Sound quality is certainly not what you might call 'audiophile'.

As hard as we tried to play around with the control panel settings, both music and games felt a little hard when compared to something like the X-Fi Titanium HD.

We had just been reviewing the incredible Asus RoG Xonar Phoebus, of course, but even so there's nothing about the tonal quality of the Recon3D PCIe that stood out.

That wasn't helped by a definite metallic edge to a lot of sounds in both games and music – if you want warm, valve-like tones through your headphones, look elsewhere.

One interesting feature which also failed to deliver is the 'Scout mode'. It's supposed to amplify the sound of distant enemies so you can hear them coming more easily.

It might be called cheating in a pro-gaming tournament, but sounds intriguing all the same. In practice, though, it was hard to tell what was different about it.

A new sound chip from Creative – that should be excitement enough.

Especially as it comes with a very sophisticated driver suite for controlling all of its various processing parts.

The trouble is, in practice, there's nothing exciting about the sound quality at all, and the certainly not enough to justify the price.

If you're spending this much, go the whole hog and get an X-Fi Titanium HD for just a little more – it may not be designed for gaming, but it sounds great.

It's not that the Recon3D is a bad card, but as a major new release from Creative perhaps we just expected too much of it. There's nothing that would convince us to upgrade from a decent X-Fi, and coming from on-board sound you can get better for less.

Doesn't deliver what we'd hoped for from a new Creative card. Good, but too pricey.