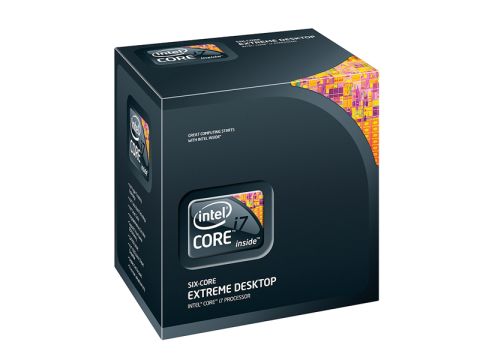 The Intel Core i7-980X Extreme Edition has up to twelve cores, six of which are virtualised through HyperThreading

The six core upgrade is very appealing indeed, but we think if you are looking for bang-for-buck returns then you should carry on rocking your four-core CPU until the industry gets up to speed with this 6-core offering

Build it and they will come. That, surely, is the thinking behind the launch of this new six-core monster from Intel. You almost definitely don't need it. You probably couldn't make proper use of it. But here it is all the same: the mighty new Core i7-980X Extreme Edition.

Nevertheless, a small cadre of enthusiasts and power users do demand more. It's this very group that Intel is targeting with this impossibly powerful and pointlessly expensive flagship chip.

Still, we have a feeling they'll be very happy with what Intel is giving them. Six cores is obviously the biggest news, a first for a desktop PC processor. But this is six cores à la Intel and that means two threads per core.

Fire up the Performance tab in Windows Task Manager, therefore, and you'll be greeted with no less than 12 graphs, one for each logical processor. In our best Quake III voice, that's IMPRESSIVE.

The 980X is also Intel's second chip with fancy new 32nm transistors. As ever, the benefits of this "process shrink" from Intel's existing 45nm node are several.

For starters, it allows Intel to pack in more features. In fact, the six-core 980X and its 1.17 billion transistors is actually smaller than any of Intel's quad-core processors. And that is despite the fact that Intel has upped the chip's shared cache memory to a mammoth 12MB.

Smaller chips, of course, are typically cheaper chips. Inevitably, Intel is going to milk the 980X's six-core novelty status for a while. But more affordable models of the new six-core Gulftown core, as the chip is known internally at Intel, are expected later this year. For now, it's just this lone £800 Extreme Edition model.

Anyhow, smaller transistors also tend to use less power and hit higher clockspeeds. We'll come to the former in a moment. But as for the latter, the 980X is officially rated at 3.33GHz with a maximum of 3.6GHz available courtesy of Intel's auto-overclocking Turbo Boost function. Pretty much the same frequencies, in other words, as Intel's speediest quads, but with a couple more cores thrown in.

Elsewhere, there isn't all that much to report. Architecturally, Gulftown is pretty much a standard Nehalem class processor, the likes of which have been on sale for about 18 months. Not that this is a bad thing.

On the contrary, the Nehalem architecture remains cutting edge, replete as it is with an integrated triple-channel memory controller and all manner of 64-bit, virtualised and HyperThreaded goodness.

For the record, the 980X is another chip that only works with Intel's high-end LGA 1,366 CPU socket. For now, owners of PCs or motherboards with the LGA 1,156 socket are out of luck when it comes to six-core thrills.

Moreover, what the carry-over architecture does mean is that you shouldn't expect this new chip to do anything more than behave like a six-core Nehalem processor. There's no new magic under the hood.

Indeed, our benchmarks back this up. In single threaded tests, it performs precisely on a par with the identically clocked Core i7-975 Extreme Edition quad-core CPU.