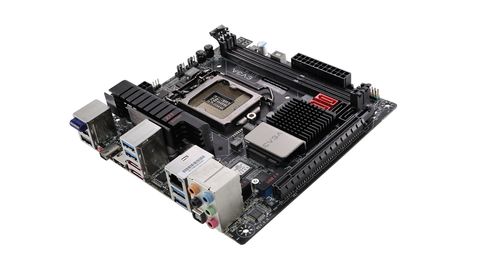 There is something we find eminently pleasing about unwrapping a new mini-ITX motherboard, especially one that comes as highly specced as EVGA's Z77 Stinger.

The board is a fine example of motherboard aesthetics, all black PCB and matte-finish component heatsinks. It's an impressive board for the enthusiast mini PC builder too, with on-board power and reset switches for easy testing.

The most effective feature, though, is the digital display. Ordinarily, this is used for displaying POST codes for easy debugging of a build, but once the OS is successfully loaded, it becomes irrelevant.

On the Stinger though, once it's run through the codes, the display switches over to showing you the real-time CPU temperature. When it's buried in among your PC's innards it's not that exciting, but during the building, testing and overclocking process it can be invaluable - and is definitely a welcome enthusiast touch.

The difficulty is that the Z77 Stinger is up against some rather serious competition in the form of the similarly well-specced Asus P8Z77-I Deluxe and the more budget-oriented ASRock Z77E-ITX.

The Asus board has been out for a good while now and, if we're honest, it's the best ITX mobo we've tested to date. The combination of stock-clocked gaming performance and overclocking potential makes it a perfect match for a wee gaming rig.

That's partly where the Stinger falls short: at stock CPU speeds it's well off the pace of the Asus board in terms of both gaming performance and standard CPU prowess. Where it does show some impressive chops is in the amount of extra pace you can squeeze out of the clocks on the CPU. We managed to get the Stinger running stably up to 4.7GHz, whereas the Asus board tapped out at 4.64GHz.

General CPU and gaming performance is where the Z77 Stinger falls down against the competition, and even impressive overclocking can't push it ahead of the other mini-ITX boards we've tested. It could be a board worth revisiting though, if EVGA manages any improvements with future BIOS tweaking.

Sadly for EVGA though, even at that speed the Cinebench scores were slower than the P8Z77-I Deluxe at its lower top-end clock speed. That's rather disappointing considering the Asus mobo has been around for so long it's cheaper than this wee EVGA board.

Comparing the Stinger with the £117 (about AU$185, US$175) ASRock board makes even more depressing reading for EVGA. Its stock performance is on par with the Stinger, and it manages better gaming performance too.

However, thanks to the ASRock board's budget bent and the Stinger's more impressive componentry, the EVGA boasts a better standard of overclocking. That comparative lack of performance at stock speeds lets the Stinger down, however, especially given the relatively premium price point. It almost feels like it could've done with a bit longer on the EVGA test benches.

There's a great mini motherboard in there somewhere, and maybe a few BIOS tweaks down the line will unlock it. That said, considering it's a mini-ITX board, it's still an impressive offering. It's just that other companies have already done it better.