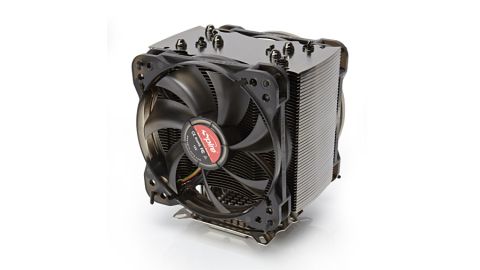 The third generation Spire TherMax Eclipse (TME) III is the latest CPU cooler to come out of the Spire manufacturing plant, and it's a decent little chiller.

The name Spire might have you scratching your head, but while it's not as in-your-face as some of its competitors, the company has been quietly making some impressive cooling products - among many other things, such as cases and accessories - for a good number of years.

The latest product to come out of the company's CPU cooling arm is the rather striking TME III. It is, as you might be able to gather from the name, the third example of the Spire's TherMax Eclipse CPU cooler designs to see the light of day. The previous two examples were single-fanned units, but the TherMax Eclipse III doubles up and comes with a pair of 120mm fans.

It looks the part too. Its black nickel finish and dimpled cooling fans makes it stand out from the crowd. Not only does it look good, it benefits from build quality too. You even get a five-year warranty with it.

The Spire TME III is a direct contact cooler (the heatpipes are flattened at the base of the cooler and make direct contact with the CPU), and uses five 8mm copper heat pipes to transport the heat away from CPU and into the 45-finned aluminium heatsink.

The cooler performs pretty well with a single fan mounted or both mounted, though the dual fan obviously gives a slightly better cooling performance. But if space inside your PC case is at a premium then the single-fan performance should be perfectly adequate.

Of particular note though is just how quiet the 120mm PWM fans are. Even with both installed and the CPU being pushed they are very quiet, and when the system is in idle then it's a real struggle to hear them.

That's no surprise really given the low spin speeds at which the fans operate - they're rated between 600RPM to 1,800RPM. Despite this low rating, even at the highest spin speed the fans still shift an impressive 74.63CFM of air.

The fans are mounted using rubber mounts which are a little tricky to use and at one point had us pining for the good old wire mounts. In the end though, they worked fine and prevented any rattling.

When we got our cooler out of the box, one of the fans was already attached. As we found out the hard way, the first job is to take it off as you can't access the mounting bolts with it in place. We also don't see the point of the added complication Spire has introduced by making the fan block connector so short. It didn't reach anywhere near the motherboard header on our test board (a Sapphire Z77 - nothing out of the ordinary), so we had to use the supplied extension cables.

While the Spire TME III certainly performs well, the two BlackStar 7 bladed fans are the stars of the show. Even when the CPU is at 100 per cent maximum, they are pretty hard to hear. The build quality and finish of the cooler is really top notch too, with the black nickel coating setting it off very well.