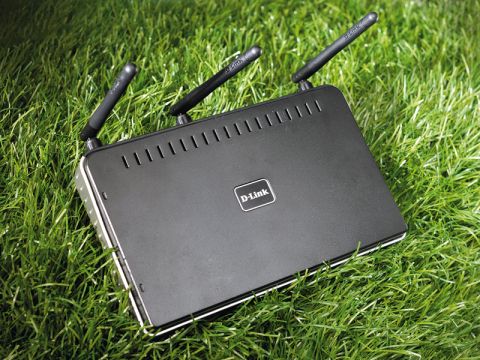 The fastest wireless file transfers, but not quite quick enough for 1080p vid streaming

For those seeking the ultimate in raw wireless performance you need look no further than D-Link's DSL-2740R.

It's clearly the quickest router that we have tested in a while. And that's despite the fact that it's limited to the 2.4GHz frequency and therefore lacks the supposedly superior 5GHz functionality of the dual-band Linksys WRT-320N.

At close range, it achieves a table-topping 9.34MB per second. Arguably even more impressive is the 8.6MB per second result in the room-to-room file transfer test. That's a figure no other router that we tested could match, even from a distance of one metre.

As for streaming video wirelessly, not even this enormously rapid router can cope with the demands of 40Mb 1080p content. In practice, that's probably not going to be a problem for anything but top notch Blu-ray discs.

But it's still a shame, because it means you can't set up a wireless home cinema and be confident that it will cope with anything you decide to throw at it; some content will still have to be stored locally on the playback box.

Elsewhere, the DSL-2740R puts in a very solid performance with wireless broadband performance that's scarcely any slower via Wi-Fi than it is over Ethernet, even at the 10 metre range. A wireless ping of just 40ms is likewise the best figure achieved by any router on test this month.

With that in mind, D-Link's decision to go with with fixed rather than removable antennae is perhaps less of a drawback. That means it's not possible to replace the three standard antennae with high gain items for improved range. It does a pretty good job as standard.

As for the browser interface, it's one of the most slick and polished UI's we've seen for a router. The range of tools as well is nothing less than comprehensive, including all the remote management, port forwarding, traffic filtering and prioritising options you could wish for.

The latter will mean that hefty downloads won't lead to laggy web browsing or painful lagging or HPB episodes when fragging online.

There are also a few surprising extras you don't normally expect to find at this price point, including an easily configurable guest network for when you want to share your broadband while restricting network access.

In fact, aside from a general sluggishness in response from the browser interface, our only real criticism with the router is the lack of parental controls.

We're also pleased to note that D-Link has provided default access details on the outside of the box. It's a minor detail, for sure, but it means you'll always be able to get the box up and running again should you lose track of your wireless key or not have the manual to hand.

Overall, then D-Link has pretty much nailed it in terms of features and performance. Admittedly, it lacks the fancier frills of the awesome Fritz!Box, such as VoIP or USB support, but not everyone will want those features.

It also doesn't provide the user with the almost ludicrous wealth of data, analysis and graphs that other routers do. But then it's nearly half the cost.