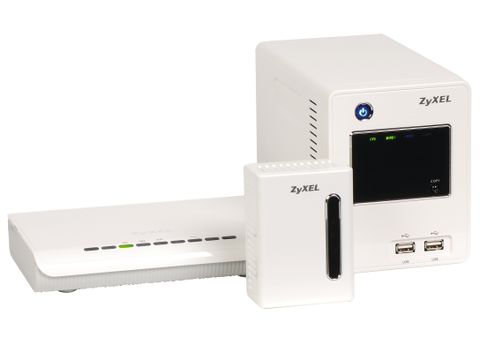 As ever more TV and other media finds its way into the home from the internet and on to a PC, finding a means to display stored video files on your TV screen and other screens in the home is essential.

And that means streaming video (and music, and pictures) around a home network to be viewed on PCs and TVs alike. For this you need a computer to download, store and stream the media, a data connection, and a device to extract the streamed files and display them on the TV using conventional AV connections - unless you are going to dedicate an extra PC in the living room next to the TV. That means a digital media adapter that actively gets the files to watch or listen to from the storage PC and displays them on the TV screen.

ZyXEL's DMA1000 digital media adapter (ZyXEL calls it a media streamer but it doesn't really do the streaming) is the size of a paperback book and it connects to a wired network using CAT5/RJ45 cables. This gives the DMA1000 an advantage when it comes to playing high data rate files such as HDTV footage; a cable carries data at a faster rate and with greater reliability than any wireless connection.

The DMA1000 is geared up for high-quality and even hi-def playback. It connects to your TV not just using composite video and stereo analogue audio, but S-video and even HDMI with separate digital audio output too. The DMA1000 can stream HD video at 720p or 1080i from your PC hard disc to your HD-ready TV screen and Dolby Digital system.

Software on the PC assembles the list of available video, music and photographic media and the DMA1000 presents a simple menu system on the TV screen to select the files to play.

A remote control handset is used to operate the DMA1000 and this includes the normal 'transport' controls for playback. The remote is a bit unresponsive, but that may be down to the IR window in the DMA1000 being half hidden under the front edge. It's reasonably fast at opening media files on the remote storage, and the quality of playback is excellent; even HD material transported across the home and rendered on the TV screen is in pretty much as fine detail as if played on the host PC, and with no dropped frames.

Storage for your media files can be on the remote PC, or even on a USB memory stick plugged in the rear of the DMA1000 - or you can use a network storage appliance, such as ZyXEL's own NSA-220. The NSA-220 connects directly to the DMA1000, or to the network hub providing storage for the whole network. It's supplied 'empty' but can take two SATA HDDs to provide up to 1.5TB of storage with RAID data mirroring for security. USB connections allow for additional storage and in a ZyXEL system it's plug-and-play.

Although the data connection to the DMA1000 has to be by cable to obtain the necessary speed (usually a cabled network or a direct RJ45 connection from a single PC) - you don't to wire up your home to use it. ZyXEL has a trick up its sleeve - PLA401 Homeplug AV Powerline adapters.

These convert the network signals from an RJ45 cable to travel along the mains wiring in your home, so you just plug one adapter into a power socket near one device, and the other near another, with short flying CAT5 cables to each adapter, and the adapters take care of the connection in between, at up to 200Mb. It's simple to set up and use.

The DMA1000 will appeal to more people than just the 'techies'; this digital media adapter is one of the easiest to set up (with no nightmare of wires) and has a catalogue of home network products behind it.

With such stunning performance with high data rate HDTV files and super HDMI output, the DMA1000 is a top choice to get PC-based TV on a TV screen.