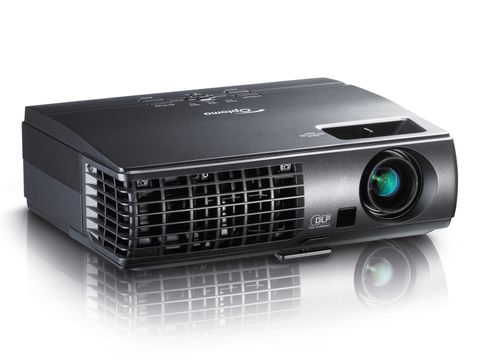 Despite the small size, the EP7155 has a decent specification

Considering the size and the price, this projector manages to cram in a lot of goodness

This data projector comes in a tiny box and is a very light 1.4kg. It's so small the tiny carry case has a compartment for the cables that is almost as big as the section for the projector itself.

Despite the small size, the EP7155 has a decent specification and a 2500 ANSI lumens brightness rating. Inputs are the usual VGA, Composite and S-Video, but you also get an HDMI input which may not be much use to laptop users, but which might appeal if you have a PlayStation 3.

The noise rating of 33dB is relatively high, but that's quite usual for a small projector, as there isn't much opportunity to baffle the noise with the casing. The noise overwhelms the feeble 1-Watt-speaker to such an extent that they could have done without the audio altogether.

Optoma quotes the same noise rating for Bright and Standard modes because there isn't an Eco mode. You can choose a presentation mode called Bright, but it's nothing like the difference in brightness and noise level you get with the other projectors so there's no option to reduce the noise level.

The range of zoom is quite small, so the most likely way to change the size of the displayed image is to move the projector back and forth on the table; and while we're picking fault, the remote control has 25 buttons and is horrendously complicated. You'll do far better to use the buttons on the projector, although that may not always be convenient.

That's the bad stuff out of the way, and the upside is a really good picture that is lovely and bright and also exceptionally sharp and clear. The five-segment colour wheel doesn't sound like it's anything special, but the resulting picture is quite astonishing for a DLP projector.