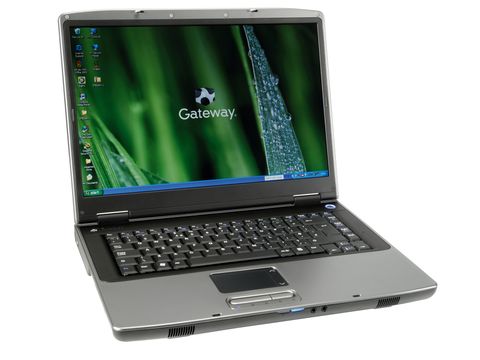 Would you give a £600 laptop to an eight year old? That's what Toys-R-Us suggests on its Web site. The company is the only UK high street shop to stock Gateway's products, which is a shame because on the strength of the MX6922b, they should be more readily available.

Gateway's device sits at the upper end of its current laptop range. None of its products feature Core 2 Duo, which indicates that the company is targeting home or business users who don't require excessive computing oomph to get the job done.

The specification of the MX6922b supports this view. The Core Duo CPU with Centrino know-how means that you'll achieve pretty good performance without draining the battery rapidly. As such, multi-tasking on the MX6922b - for example, carrying out a system-wide virus scan while viewing your photos - proves to be achievable. Gateway states that the battery lasts up to four hours, depending on usage.

We think that three hours is a more realistic figure, which is still impressive. The laptop's internal design also results in a much quieter system; indeed, the system is almost silent when not under load. Just as importantly, it runs fairly coolly, too.

Externally, the MX6922b is pleasing to the eye. It's similar in size to last month's Zoostorm 4-6610, but in terms of the chassis at least, Gateway's product is leagues ahead. The silver and black combination looks classier, while subtle curves on the edges and around the keyboard emphasise its family appeal. Handily, the trackpad features a scroll area, and the left- and right-click buttons are responsive without being overly firm.

The standout feature here is the screen. The UltraBright coating means that you need to be careful where you place the MX6922b, but once you've got your viewing position sorted out, you'll be rewarded in an exceedingly sharp, clear display. It's ideal for viewing photos and video. Crucially, the speakers added to the experience - speech, music and exploding spaceships in Star Wars really sounded the business.

Gateway's laptop comes with Windows XP Home. No surprises there, but interestingly a sticker on the chassis states that the device is 'Windows Vista Capable'. This is a clever move by the company, ensuring that customers won't be put off from buying this laptop because they believe that it's only capable of running a five-year-old OS, when a brand-new one is just around the corner.

Other pre-installed software includes MS Works 8, PowerDVD playback and burning apps, and trial versions of Office and McAfee Internet Security Suite. Of particular note is Gateway's Big Fix software, which is a friendly alternative to the rather faceless Windows Update. This works a treat and combined with its wireless-g capability, makes keeping your system in tip-top condition second nature.

This is a laptop that doesn't overstretch itself, and as such it's a safe bet for a family/work purchase. Gateway's system can act as the archetypal digital hub for music, video and photos. It can also handle office-type programs with ease and the odd game, too (although with its integrated graphics, don't expect too much).

Surfing the Net without wires will make planning the family holiday a whole lot easier, too, if you can do it from your living room. Perhaps Toys-R-Us is right: this laptop is suitable for eight year olds - with a little supervision, of course.