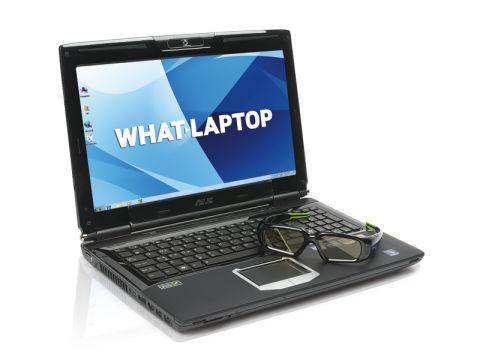 The Nvidia 3D Vision is still in its infancy, but the effect is still quite good

Although we think the 3D effect is very cool, we don't think there is enough content to make the investment worthwhile yet. One for the early adopters who just can't wait

Although the technology world's obsession with 3D has waxed and waned over the past few decades, it's now firmly back in fashion. Asus is one of the first to capitalise on this and the G51J (£1,699 inc. VAT) is a gaming laptop that provides hard evidence of 3D's uses.

The machine utilises Nvidia's 3D Vision technology to bring your games, movies and photos to life in the glorious third dimension. Overall, we found the effect worked well and you'll be impressed how images jump out the screen at you.

The glasses feel a little strange to use at first, but we soon got used to them and didn't suffer the nausea we experienced when using other 3D-capable laptops, such as the Acer Aspire 5738DZG-434G50Mn.

When using the glasses we did find content appeared a little dim, however, and colour quality also suffered – with even the Nvidia 3D Vision-capable games such as Resident Evil 5 appearing quite washed out. We also found the equipment a little fiddly to set up, and synching the glasses with the infrared remote proved to be especially problematic.

When not using the machine's 3D capabilities we found the laptop pleasant to use. The screen is exceptionally bright and provides good detail, although it's a shame it doesn't support Full HD resolutions.

The machine's build quality also impresses and while a garish design is in place, we actually quite liked it. The keyboard is large and comfortable to use, although quite spongy, and the dedicated numeric keypad is a nice touch for those who regularly input data.

An Intel Core i7 processor powers the laptop and, along with 4096MB of DDR3 memory, provides enough performance for running even the most resource-heavy applications.

One terabyte of hard drive space offers exceptional storage and the Blu-ray drive lets you watch HD movies on the go.

Portability is limited, as you would expect, but the networking components provide the latest technology, so you will have no problems connecting to networks for online gaming sessions.

Despite being an old concept, it's still early days for the latest 3D technology, and the Asus G51J proves this. NvIdia's 3D Vision technology does work, but we think it will be a while before the content that completely immerses you arrives.

The price tag also seems a little high. If you are keen to try 3D and aren't necessarily bothered about gaming, the Acer Aspire 5738DZG-434G50Mn might be a better, and cheaper, option.