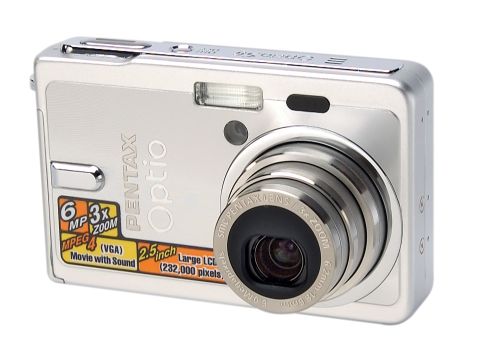 This cute and stylish compact gets many things right, and is certainly fun to hang out with

We've long been enamoured with the Canon's Ixus range, but the new Optios are equally attractive. Take the S6: from the front it takes the concept of a simple silver rectangular box with a lens totally to heart, with little in the way of unnecessary adornment - and looks all the better for it.

Turn it around and a large LCD screen covering two-thirds of the back panel greets you. This 2.5-inch beauty is one of the major improvements this camera boasts over previous Optio offerings. But the good news goes beyond size, with the backlit anti-glare screen proving itself a real star when it comes to framing and reviewing in a variety of tricky light sources.

The 232,000-pixel count is excellent, especially for reviewing images and perhaps even partaking of a little on-board editing. The S6 offers you the chance to trim, rotate, add colour and digital filters, and even reduce red-eye on your images - just add a decent printer and the camera enables you to totally cut the PC out of the photo printing equation.

Another improvement is the leap from five megapixels to six, which is currently de rigueur for any compact. We're not going to complain about the extra resolution, as long as it doesn't come at the cost of increased noise levels. Still, if you're planning on printing out big, then it could be a nice update. The only other departure from tradition is the decision to use the DivX MPEG-4 codec for shooting video.

This form of compression enables you to get more minutes of footage for your megabyte of storage, although it still records in a maximum of 640x480 pixels with a 30fps frame rate. As for video quality, while it's good for short clips, we wouldn't recommend the S6 for shooting your daughter's wedding... Still, the improved video anti-shake technology works well and even shooting in low light produces a relatively judder-free performance.

Elsewhere, features are standard for this type of compact, with Pentax's useful Mode palette - featuring pre-configured setups for shooting a variety of different subjects - coupled with the idiot-proof Green option to make this one very user-friendly snapper.

In use, the Optio S6 is quick and responsive. The Sliding Lens System lens pops the 3x optical zoom out of the 19mm body with the minimum of fuss, and is ready to take the fi rst shot not far beyond the two-second mark. Multiple shots can be taken rapidly in one of several available drive modes, up to 1.6fps.

The shutter release also benefits from a lack of lag, although it's too close to the on/off button. The auto focus system was also quick and good at picking up on the main attraction. The same is true of exposure and white balance, although leaving the automatic setting alone and adjusting it manually gave better results.

In general, the images this camera produced were good, but not great 100 per cent of the time. There's nothing wrong with the way the S6 handles colour or contrast, but troublesome noise and occasionally excessive grain let it down.

As you'd expect, this becomes more of an issue the higher you push the ISO (up to ISO 400 is available) in order to shoot in low-light conditions. While we could accept this, the grain sometimes creeps into even well-lit daylight shots. There's also a degree of chromatic aberration with many of the images, especially in shady conditions, although barrel distortion is kept to a minimum.

The S6 looks great and takes passable photos quickly. This gives it the opportunity to grab a place in the hearts, minds and pockets of that segment of the digital camera boom generation who like nothing more than to snap their mates fooling around on a night out. However, for the more serious user, it lacks that level of sheer quality to totally win us over. Shaun Marin