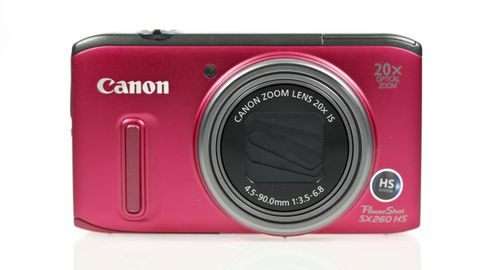 It's been five years since Canon launched its PowerShot SX series of family superzooms. SX cameras were designed to offer big lens performance at a more affordable price than traditional high-end superzooms, without skimping on features and functions.

The Canon SX260 HS features a wider, longer 20x optical zoom than outgoing PowerShot SX230 HS. It's been launched alongside the Canon PowerShot SX240 HS, which is essentially the same camera but without GPS.

Indeed, with a fast memory card and the right shooting conditions, Canon rates the PowerShot SX260 HS's high-speed Burst HQ mode as capable of taking full-res shots at 10.3 shots per second (the Canon SX30 HS could only capture 3MP files at around 8.1 shots per second).

Other changes include a more traditionally proportioned 3-inch 461,000 dot LCD screen, which is more suited to composing still images on, compared with the similarly specced 16:9 widescreen monitor on the Canon PowerShot SX230 HS.

The Canon PowerShot SX260 HS also detects up to 58 scene types in Smart Auto mode (compared to the Canon PowerShot SX230 HS's 32 scenes) and packs Canon's Intelligent IS image stabilisation system that detects the type of subject being photographed and optimises the setting accordingly.

In terms of shooting modes, the Canon PowerShot SX260 HS has something to appeal to all levels of photographer. Joining the full complement of advanced P, A, S, M settings are three fully automatic ones.

The ubiquitous green Smart Auto - a point-and-shoot mode that offers limited control - and the handholding Easy mode from the Canon SX230 HS are joined by Live View Control mode. This offers more snapshot simplicity, but with on-screen sliders offering six steps of adjustment for brightness, colour and white balance.

Other highlights on the Canon SX230 HS - priced at £329 in the UK and $349.99 in the US - include a Smart Shutter mode, which uses face detection to enable you to fire the shutter with a smile or wink, and nine different Creative Filters.