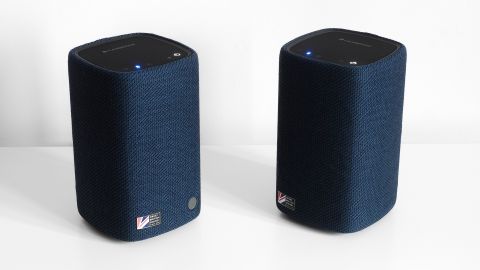 An easy-to-use reminder of why stereo sound still rules, the Cambridge Audio Yoyo M speakers are a great sounding pair of speakers. Their functionality is excellent, and their sound quality is close to perfect, but don't expect their bass levels to be hugely deep.

To some, Cambridge Audio is still just the company that makes the affordable-but-good amps and CD player separates almost no-one they know seems to buy anymore, but it has also spent the last few years making top-quality wireless speakers.

The Yoyo series is its latest family, and all three in the clan wear woolly jumpers to give them a look ready for the lounge. Cambridge Audio’s Yoyo M set is the middle child, a true wireless stereo pair of speakers that you can pick up for £300 (around $375/AU$490).

As long as you don’t need party-ready bass, they’re an effective twosome.

Stereo pairing of wireless speakers is not new. Many Bluetooth speakers offer it, despite the fact that it often requires button-presses not dissimilar to a video game special move. The Cambridge Audio Yoyo M are stereo pairing natives, though.

This isn't a bonus feature highlighted on the box that few will use. The pair of Cambridge Audio Yoyo M speakers come in the one box. Turn them on and they pair automatically.

If you’ve not used too many wireless speakers, this sort of simplicity seems obvious: why wouldn’t they? However, we’ve used dozens of wireless speakers and there are almost always headaches as soon as you go beyond using a single unit. Not so here.

The Yoyo M is the only one of the new trio of Yoyo speakers to use this ‘auto’ stereo pairing, though. What all three speakers do have in common is the use of 100 percent wool covers, rather than the nylon or metal seen in a lot of alternatives. It’s soft and looks good.

Cambridge Audio is proud of this cover. On the back there’s a big label telling you it’s woven in Yorkshire by Marton Mills, a UK weaver established in the 1930s. But, yes, the actual product is assembled in China, like virtually every wireless speaker.

Regardless, the Cambridge Audio Yoyo M is proud of its Britishness, and ships with a 'Great British sound' sticker on the front (it peels off).

The Cambridge Audio Yoyo M comes across as more grown up than the average Bluetooth speaker. Several wool knit shades are available (grey, silver, blue), but all are muted. They’ll look great nestled in a bookshelf, and would be small enough to fit on a kitchen worktop without taking up too much space.

Using these around the house needs to appeal, because the Cambridge Audio Yoyo Ms aren’t perfect holiday speakers – not if you’re flying, anyway. A pair would take up a lot of space in your luggage, and they’re not designed for the outdoors. While wool is naturally water-resistant, the sockets sit on the bottom, uncovered. Even using these speakers on wet grass isn’t the best idea.

The master speaker of the pair, the one with the grey logo on the front, can be used on its own as a mono unit. However, Cambridge Audio has made the decision not to advertise how to completely unpair them, to turn them into separate Bluetooth speakers (it involves long-pressing three buttons at once).

Why? Once you unpair them you lose the Cambridge Audio Yoyo M’s breezy usability, and you'll need to go through the pairing process – the main reason stereo-pairing Bluetooth speakers usually isn’t that attractive – again.

We’ve been using them as a stereo pair in the lounge, then taking the master around the house for listening while cooking and so on. Just don’t buy them thinking you can easily palm one off to the kids to listen to Stormzy, or whatever they’re into.

It does seem a shame, though, that the ‘slave’ speaker won’t even accept a 3.5mm line-in without being unpaired. There’s a 3.5mm socket on the underside of each box, alongside a thread to let you mount the speakers on stands, a USB port for charging other devices using the battery and a button that makes the LEDs up top display the battery level.

The speakers last for up to 24 hours off a charge, which is excellent.

On the top of the Cambridge Audio Yoyo Ms are five LEDs that, in normal use, tell you the volume level. These sit next to a series of touch buttons, part of the rubbery surface of the top panel.

They let you adjust the volume, turn the units on and off, and take calls using the integrated mic. Press the power button on the main unit and it switches both speakers off – a smart addition. The entire top panel also acts as a touch surface. A left-to-right swipe across it skips to the next track, a right-to-left one pauses playback (right-swiping then resumes).

As these are Bluetooth speakers rather than Wi-Fi ones, there’s no app involved. If you know how to Bluetooth-pair a speaker, you can use the Cambridge Audio Yoyo Ms.

On occasion the slave speaker loses connection briefly with the master, usually when there’s some interference or if the source is close to its maximum range. However, there’s no weird garbled Bluetooth noise when this happens; the second speaker just goes silent for a moment before syncing back up, normally within a fraction of a second.

It’s all pretty seamless. Take the master speaker away and, when out of range of its brother, it’ll switch to mono. When it gets closer to the other box the two will hook up again automatically, no effort required.

The Cambridge Audio Yoyo M speakers aim to please sound-wise, if in a slightly safe way. Each of the boxes is effectively like a little bookshelf speaker, with a full-range driver and a tweeter in each enclosure.

Each speaker has a 1.2-inch full range driver and a 3-inch bass driver to handle lower frequencies up to 400Hz.

They're a reminder of why two speakers are so much better than one. The Cambridge Audio Yoyo Ms can fill rooms without relying on aggressive volume levels. Many makers of wireless speakers boast about ‘360 degree’ sound dispersal, but it’s nothing like the proper stereo soundstage you can get with a properly positioned stereo pair like this.

While the tweeter is slightly positional, the Cambridge Audio Yoyo M boxes are less picky about placement than most hi-fi speakers too.

The sound itself is very smooth, with plenty of detail, and that detail is not supplied by a bright or granular treble; the top end is sweet, not sharp.

Given the relatively small drivers, we’re impressed by how loud this pair can get without sounding brash – loud enough to be antisocial. There’s also far less obvious compression at higher volumes than you get from wireless speakers that use tiny little drivers, relying on passive radiators for the bulk of their sound.

These are intended to be the sort of speakers you can listen to all day long; if you want speakers to chill out to these are some of the best, particularly if you can position them reasonably far apart to create a soundscape big enough to lose yourself in.

There’s one problem though, and it limits the Cambridge Audio Yoyo Ms' usefulness as real party speakers – and we’re not talking about cheese and wine get-togethers here, but the kind of parties that make your neighbours hate you.

The Cambridge Audio Yoyo Ms have decent bass to a point. There’s zero boominess, good balance, and enough volume to match the full-sounding mids. However, bass depth is not that impressive. The Harman Kardon Go + Play 2 trashes these speakers in terms of raw bass power.

What this means in practice is that while bass guitars tend to sound full, kick drum lines can lack the intended impact. This is noticeable with dance tracks like Photek’s Quadrant, which is packed with low-frequency bass; it just doesn’t have enough authority through these speakers. The effect is much less obvious in tracks such as Fleetwood Mac’s The Chain, where the real acoustic bass drum doesn’t rely quite so much on very low-frequency bass.

Just about anything that doesn’t lean on the very lowest frequencies sounds great through the Cambridge Audio Yoyo M speakers. Older rock like Fleetwood Mac is a decent example, while something like jazz pianist Brian Meldhau’s Crazy Quilt shows how much Cambridge’s moderate approach does for the mid-range; the Yoyo Ms' delivery is so much more natural-sounding than a lot of wireless speakers.

It all comes back to the same quality those woollen covers engender. The Cambridge Audio Yoyo M is a grown-up speaker – now you just have to decide whether you want grown-up sound.

The Cambridge Audio Yoyo M speakers are the easiest-to-use wireless portable stereo speakers going. As they come pre-paired you just take them out of the box, switch them on and off you go.

They’re also a reminder of why stereo sound still rules, even if people seem to be obsessed with having multi-room speakers scattered around their houses these days – here it lets these two small speakers create a larger soundstage than any single-box wireless speaker.

There’s just one potential problem. These speakers have fair bass, but it’s not hugely deep. If you expect to feel those bass drum beats in your chest, the Cambridge Audio Yoyo Ms may leave you cold.