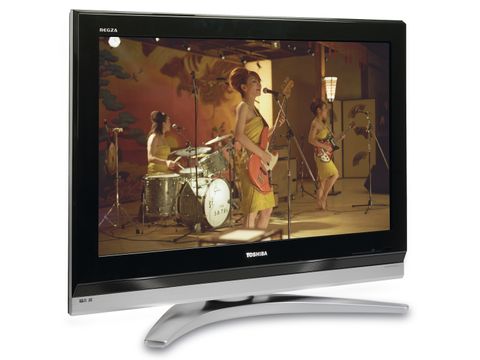 A good TV certainly, but not the classic we were hoping for

For all the things LCD gets right, there's one thing at least it will always struggle with: motion. The way LCD panels work makes it tough for them to respond to changes in picture information fast enough to show motion without the pictures blurring or juddering. Cue the Active Vision M100 technology Toshiba's introduced to its new 32-inch LCD TV, the 32WLT68.

Active Vision M100 is essentially an extension of the previous Active Vision LCD engine that adds to the usual colour, black level, and detail enhancements a new system for improving motion. This system in essence resembles the old 100Hz system used to combat flicker on CRT TVs in that it doubles the refresh rate of the 50Hz PAL picture, thereby reducing the troublesome delay between different frames of motion.

Active Vision M100 isn't the only trick up the 32WLT68's sleeve, though. For starters, it's also got three HDMIs. What's more, these can all take the 1080p format now gaining such currency with the arrival of Blu-ray and HD DVD.

Then there's an automatic backlight adjustor that can adjust the brightness output of the TV's lamp to best suit the image content - a trick which helps the TV boast a very high (by LCD standards) claimed contrast ratio of 3500:1.

Elsewhere, meanwhile, our eye was caught by a digital tuner, a subwoofer line out for an optional Toshiba subwoofer, and a digital audio output for sending Dolby Digital 5.1 broadcasts to an AV receiver.

The 32WLT68's M100 motion handling is more than just a gimmick. A swift bout of hi-def Premiership footie action is sufficient to reveal players that move noticeably more smoothly and clearly with M100 activated than when it's turned off.

Also very impressive is how sharp and textured hi-def pictures look. You can make out every last little detail in the busy floor of Vernita Green's kitchen during an overhead shot of Kill Bill Vol. 1. This level of crispness is achieved without any apparent harshness or dot noise.

Our Premiership HD football and Kill Bill sources also provide evidence of a fine 32WLT68 talent when it comes to colours. The outrageous pink and yellow colour scheme of the truck The Bride drives to Vernita Green's house in, for instance, has never looked more endearingly gaudy.

Other good touches in the Toshiba's pictures include retention of shadow detail in dark picture areas, and edges that look sharp but never overstressed.

There are a couple of little niggles with the 32WLT68's pictures. First, although dark picture areas have plenty of shadow detail, they also look a bit greyed over on occasion.

Our second issue - if you can even call it that - with the 32WLT68's pictures is that it only does a good, rather than great, job with standard-definition sources, leaving proceedings looking a touch softer than we've seen on one or two rivals.

The 32WLT68 is a good TV - indeed, it's hard to imagine Toshiba making anything less. However, although it's well-featured and well-connected, it doesn't have the black level prowess to warrant a completely unreserved recommendation, and at that price we'd expect more from Toshiba.