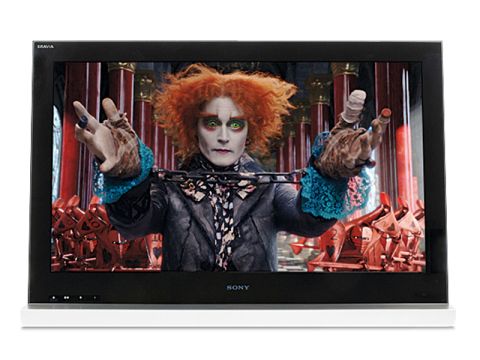 The new stand design isn't just a style statement. It allows you to tilt the screen angle for a better view

Nice design features and undeniable style make this set very appealing, but it's not quite the best LCD TV on the block

The next wave of Bravia TVs is upon us, bringing with it Sony's much-touted monolithic design in the form of the Bravia KDL-40NX803.

Naming conventions have been torn up just as we were getting used to them, so it's now a case of choosing from the EX series (essential), HX series (home cinema) or LX series (lifestyle) ranges, or the NX (networked) series, like this impressive 40-inch example.

Part of Sony's monolithic mission statement is that 'a television should look incredible even when you're not watching it'. With the continuous glass face of the TV fitting flush at the edges, the 40NX803 does look like a featureless slab of darkness.

When you turn it on, the illuminated logo and standby light make themselves known, and if you run your hand behind the frame on the right, master controls illuminate too. Overall, this slim and minimal panel is a huge improvement on last year's clumsy plastic frames.

The optional brushed aluminium table stand adds an extra twist. A screw adjustment allows the TV to lean back by up to six degrees; the idea is that this restores the proper eye-line when the TV is positioned on a low furniture unit, which, according to Sony, is becoming a more popular option in European households.

Edge-mounted LEDs illuminate the LCD panel, allowing its narrow depth and giving the picture a brightness and contrast boost. Combined with the powerful Bravia 3 Engine and the crisp 1080i resolution of its own Freeview HD channels, this is an impressive-looking set. It's also heaving with features.

Connectivity stands out, with Wi-Fi built in, and DLNA compliance for streaming from a PC. There are direct USB and PC inputs too, but downloadable web content makes it interesting.

AppliCast was Sony's first stab at putting bite-size web content on your TV. Consisting of a handful of pointless widgets that took an age to open, it's still around, but is joined by Bravia Internet Video, which makes all kinds of material available.

With wireless online access to IPTV channels like SingingFool and YouTube offering clips and music videos, or LoveFilm for HD video trailers and renting whole films, there's always something to watch.

A lot of the content is very compressed and, to be honest, rubbish, but there's good stuff in there, too. The revelation is how you can access channels via the XMB graphic interface, the crossbar borrowed from the PS3. You zip along the horizontal access to choose analogue or digital TV, movies, music, or other sources and servers, and vertically to select the item.

It's by far the fastest and best interface of any TV I've seen and suffers from just one flaw. Although it looks just like the PS3 interface and moves almost as fast, the Bravia version is presented in mushy standard-definition, so it fails to impress quite as much as it should.

The superb remote deserves a mention. It's a typically clear and intuitive backlit Sony design, but with a nicely textured finish and concave front. Flip it over and there's a single on/off switch.

On the TV itself, the connections are logically assembled, with two HDMI ports at the side and a headphone jack. Note that the USB port, as is usually the case with Sony products, can only read from flash drives rather than from external hard discs, and it struggles with formats like MP4 files.

The 40NX803's picture quality lives up to the TV's slick design and flashy interface. Our test card coaxed a pin sharp image, with a wide colour gamut and dark blacks. The reds look rather tame after calibration, but it's actually a very natural and well-balanced colour palette.

Moving 1080p24 images from a matching Sony Blu-ray player provide a steady and seamless image with no blocking, or judder during wide camera pans.

The Bravia link function kicks in to optimise the settings between the two Sony products and uses DeepColour over the HDMI connection to maintain the colour accuracy.

The polished production and glossy imagery of the latest Star Trek film are a good way to show off the vivid picture performance of this LCD panel.

Thanks to the bright LED backlight, the picture is vibrant even in direct sunlight, but remember that this is lit by edge-mounted LEDs, so it doesn't have the local dimming capability of Sony's premium LED TVs. This becomes apparent when a pale object appears in shot and the entire screen goes from black to grey to illuminate it.

The TV channels are presented particularly well, too. Both the analogue and digital stations line up on Sony's XrossMediaBar, complete with the name of the show that's currently playing. There is, of course, a proper EPG as well, showing the whole week's scheduling.

Although the analogue channels are unwatchable using my TV aerial, the 576i Freeview channels appear to be sharp enough. That's thanks to the Bravia 3 Engine processor, which upscales them accurately to fit the native 1,920 x 1,080 screen.

Scroll all the way up to the three Freeview HD channels and you get yourself an appreciative bump in the clarity, depth and consistency from the 1080i broadcasts.

Sony's S-Master speakers have pumped out a decent amount of sound in the past, but they seem a bit thin and reedy here. Depending on the input, which seems to vary quite widely, you might find yourself turning the volume all the way up to ten and you can expect a little distortion at that end of the scale.

Cleverly, when you slot the set into the optional aluminium table stand, the speakers, which are mounted at the bottom of the panel, are able to drive sound through the perforations in the plinth. Sony's NX series certainly looks like it's a tempting proposition.

The design is fabulous and the user interface and remote control are both a dream to use. The picture quality is among the best of the edge LED-illuminated models that are available and key boxes, like the Freeview HD tuner, are all ticked.

It's really just the feeble speakers, and foibles like the soft-focus onscreen graphics that prevent this set from getting the full set of stars.