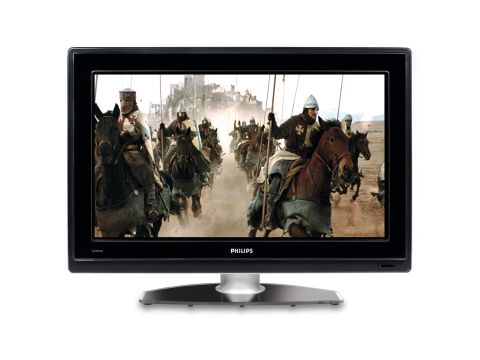 The 32PFL9632D's pictures are outstandingly crisp and detailed

The main tech we’re banging on about is Perfect Pixel HD Engine: Philips’ new image processing system. In reality this is the latest advance on the brand’s Pixel Plus system – but presumably Philips thought calling it Pixel Plus 4 would be a sequel too far.

Another key new element for Perfect Pixel HD is 100Hz. By doubling the usual PAL scanning rate, 100Hz has been proven to reduce LCD’s problems with resolution loss over moving objects. And intriguingly it’s supported here by the second generation of Philips’ ClearLCD technology, where a scanning backlight system using Hot Cathode Fluorescent Lamps – rather than the usual single backlight – producesa CRT-like scanning effect and even cleaner motion. Not to mention deeper black levels.

Add in a new 14-bit colour system that vastly ups the potential colour range, plus a new LED-lit version of Philips’ Ambilight system, and it seems almost no stone has been left unturned.

Extensive connections include three HDMIs and a USB port for playing MP3, JPEG, MPEG1/2 video and slideshow files. But rather than dwell on these, we really need to tell you how awesome the 32PFL9632D’s pictures are.

For our money, the 100Hz/Clear LCD combination delivers the clearest, most natural movement yet seen on an LCD TV.

As the massed forces charge at each other during the battle scenes of Kingdom of Heaven (recorded in HD from Sky), the characters move with impressive fluidity while camera pans avoid practically all judder. What’s more, this takes place without throwing up nasty side effects, and crucially without looking at all unnatural. The 32PFL9632D gets dangerously close to solving LCD’s response time problem once and for all. Superb.

This achievement is delivered without compromising the detailing of HD images. In fact, the 32PFL9632D’s pictures are outstandingly crisp and detailed – making the prospect of what Perfect Pixel HD might do on a larger screen truly mouthwatering.

Adding to this already heady brew are scintillating colours that breathe stunning life into the stark scenery, plus some impressively deep black levels.

In an ideal world the set’s black levels and colours would hold up better when viewed from a wide angle, and black levels could generally be even deeper. Plus very occasionally, small fast-moving objectscan leave a trace of ghosting.

But while these issues might stop the 32PFL9632 from being perfect, they certainly don’t prevent it from being probably the finest 32in LCD TV yet.