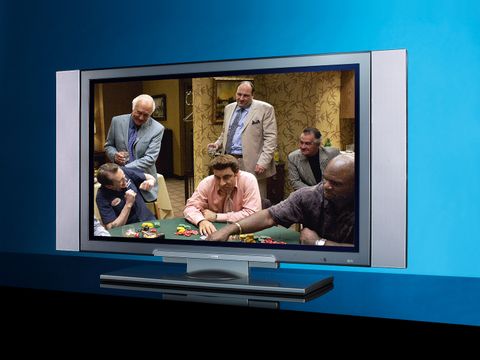 Even without the media box, this is still one of the best value 42in plasma TVs

Take the award-winning Hitachi 42PD5300 plasma, strip out the media box to get below the all-important £2,000 price point and what you're left with is the plasma TV equivalent of a stripped-down bare boards racer: the 42PD5200. Same 1,024 x 1,024 pixel ALiS panel, same neat looks and detachable speakers, even the same recalcitrant remote control.

The difference is largely one of connectivity. Instead of a separate media box, this model has the video section built into the chassis, giving you single Scart, component video, S-Video and an onboard DVI input. In fact, the original PD5300 used the panel's DVI input for the media box, making the PD5200 the model of choice when it comes to HD compatibility.

Unsurprisingly, the picture is near identical to that of the original model, including the super smooth image processing, negligible digital banding and a gentle hand with broadcast TV. While not having anything like the inyer- face gusto of the Optoma DLP, the Hitachi treads a fine line and manages to be just right most of the time.

Feeding a solid WMV HD signal through the DVI input, the Hitachi sets the pace for lower cost plasma TVs, even if the ALiS technology doesn't actually display true 720p format (it partially interlaces two fields of 512 lines, but you're unlikely to notice this).

The Hitachi is one of the the best plasma TVs we've tested. What holds it down is not so much its own foibles, but the competition that has leapfrogged it with new technology. Richard Stevenson