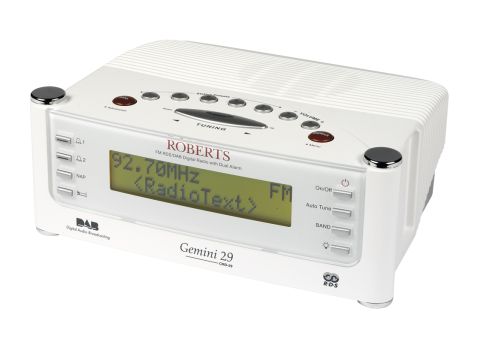 A nice enough radio for the bedroom, but £90 is an awful lot to pay for it

Digital radio's alleged revolution has been with us longer than digital TV, but it's failed to infiltrate British homes at anything like the same success. Many homes now have one DAB radio but, as with digital TV, the problem is replacing each of these.

Only with radio it's a bigger problem; there's a radio in almost every room, and simple DAB radios are still dearer than a Freeview box.

Roberts has pioneered DAB listening technology, creating eye-catching retro and futuristic designs, and features like scheduled recording and PausePlus, which have helped to build DAB's fan base (but still no digital radio for the shower!).

One room you can now place a specially designed DAB radio is the bedroom, with the Gemini 29 (also known as the CRD-29, but confusingly nothing like the other Roberts Gemini radios).

It's a compact clock radio with both DAB and FM tuners, and the operation is fairly plug-and-play - it auto-tunes the digital channels and sets the clock. The FM radio supports RDS and auto-scans for channels - there are five presets for each tuner - sufficient for most people's needs.

The channel select button is also easier to operate than the rotary dial on Roberts' iconic retro radios. The attached telescopic aerial should be sufficient, but you can attach an external cable to the socket - and the supplied spanner is also handy for tightening satellite F-connectors!

You can also plug in an external source like an MP3 or CD player and listen via headphones. The two-line, 32-character display is easy to read even with sleep-blurry eyes, and big enough to display a useful amount of information. Eight amber backlight levels allow it to be visible all night without keeping you awake.

You can choose a buzzer alarm or radio wake-up, with two independent alarms if your 'other half' has a different schedule. The radio alarm automatically switches off after an hour, but you can't preset your wake-up station and it doesn't ramp up gently - it blares out at a volume some people could find a little bit of a rude awakening.

Without stereo speakers you won't get the full benefit of DAB or even FM, and the built-in 0.9W speaker, while punchy, is prone to sibilance. There was also a mains hum that you won't notice until you try to sleep with the Gemini 29 next to your head.

It's great to have a choice of DAB stations in your bedroom, and this is a nice clock radio - but £90 for a clock radio?