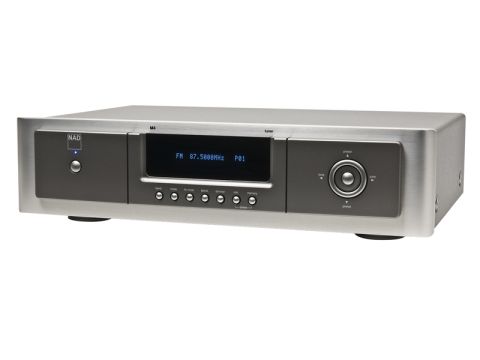 A well judged tuner which combines carefully thought-out FM performance with good DAB, and all in an unusually attractive and well-built package. Well suited to the regular user of both broadcast bands

NAD's high-end 'Masters Series' components have been in the stores for a while now and the range has made plenty of friends.

It has, however, conspicuously lacked a tuner, a lack NAD evidently felt needed addressing: the result is the NAD M4 and a tastier-looking piece of radio kit we haven't seen in a while.

Looks aren't everything, of course, but in an age of greatly improved industrial design, compared with as little as ten or even five years ago, styling is now something significant.

Something, indeed, for which people have realised it is worth parting with a fair wad of extra cash; so we're delighted to report on this tuner's substantial and nicely sculpted aluminium front panel, its tasteful and clearly labelled control layout and its generous dot-matrix display – not to mention the very robust steel casework.

The remote control is a good example of the breed, too, not so fancy as to be unusable and better laid out than many.

Like many other tuners, the M4 receives good old FM radio, new-fangled DAB Digital Radio and grandfather AM. It has 40 presets for storing analogue stations, a single analogue output plus digital outputs (both flavours), which only work with DAB, and even basic connectivity for home automation.

In terms of tweaky features, about all it offers is 12.5khz-step tuning on FM (a very handy feature though, allowing one some leeway to sidestep annoying pirate radio stations which may be close enough to legitimate stations to cause interference) and 'blend', another FM feature which trades off some high-frequency stereo imaging in the interest of improving general clarity when reception conditions are difficult.

On DAB, the usual station ordering etc. features are present and, of course, there is the range of display options – station type, scrolling 'music playing' display, technical details including station bit-rate and our favourite, error rate readout – the one way the user can be sure that reception is tickety-boo (error rate is either zero or sub-optimal, basically).

On FM, RDS gives a similar, though slightly more restricted, set of display choices. inside the case, it's interesting to see how money has been apportioned. It's already apparent from the rear of the unit – with its separate aerial inputs for FM and DAB – that NAD has not gone down the 'digital FM' route.

Tuners that receive and decode FM broadcasts via the DAB module have to date tended to disappoint, but in this case the functional blocks are separate as far as the audio output circuit.

The FM and AM sections are handled on a large circuit board which, perhaps surprisingly, bears a legend connecting it with one of NAD's much cheaper tuners and features regular commercial-grade components and an off-the-shelf tuner head.

It does, however, use some of the latest integrated circuits to receive the two bands and, as we've pointed out before in reviews of upmarket tuners, there isn't really much that can be done to better these unless a manufacturer sets out to build a really cost-no-object tuner.

In the DAB department, a frontier Silicon module does the donkeywork, again something shared with various much cheaper tuners. here, though, NAD has made two significant modifications.

First, the module is encased in a very solid metal housing that provides a significant degree of screening to and from the rest of the unit. Second, there is a very high grade DAC appended. This is built on a separate board, which also buffers the audio output from the FM section and houses the well-specified power supply.

On a practical note, NAD has set the output from the FM tuner lower than from the DAB, with the latter already lower in level (at peak output) than most CD players.

Because of the compression of dynamics used in both radio systems, subjective results seem to be quite well-balanced against typical CDs.

Basic measurements of both sections suggest that technical performance is very good, though we have seen lower levels of ultrasonic output from FM tuners.

DAB tuners vary considerably less than FM ones, and it was to the FM section that we turned first, in high hopes of hearing something revelatory. Maybe that was a high bar to set, but it's certainly true that we heard many things that we very much liked.

First, foremost and enduringly, we heard some remarkably clean radio reception. This was in part due to a decent rooftop aerial, a purchase we would highly recommend to anyone considering this or any other high quality FM tuner if circumstances permit.

Still, most tuners reviewed in these pages have been fed from the very same aerial, and in that context the M4 does stick out as one of the cleanest. Indeed, it makes a good stab with just the supplied indoor aerial, the usual T-ribbon.

FM is capable of very good sound, but one of the toughest gremlins to eliminate is a degree of harshness, especially in built-up areas where multi-path distortion is a perennial problem.

Over the years, advances in the integrated circuits and tuner heads used in most FM tuners have helped considerably in this area, but good performance is by no means automatic. NAD must be congratulated on wringing some very fine subjective results from the components it uses in the M4.

With both BBC and commercial radio stations, we found the sound to be almost completely devoid of any such effect and, as a direct result, very informative and listenable in the long term.

Naturally, detail is well preserved in the sound because of this. Getting the ultimate in detail out of an FM transmission may be one trick beyond this model, and we do feel there is some justification left, in this parameter above all others, for the even high prices of a few dedicated FM tuners from Naim and others.

On the other hand, few of those models can manage to better the tonal balance of the M4, which is again very fine indeed. The bass is very extended, but without excess or lack of control, while treble is unconstricted: as the original designers of stereo FM realised, a band limit of 15khz is barely perceptible as a restriction if it is well implemented.

Truly neutral midrange is exceptionally rare among tuners, but also hard to gauge because of the way recordings are processed. By putting into service our own FM generator, fed from a local CD player so that the reference is available at the flick of a switch, we became aware of a slight chestiness to the sound, something we've heard from many models.

However, we really do mean 'slight' and only with the most carefully prepared broadcasts on Radios 3 and 4 were we able to convince ourselves that we could pick it up in typical use and then only by listening specifically for it. To all intents and purposes, this is an evenhanded tuner, tonally speaking.

We've little to say about DAB here, save that it is clearly very competent and better than any current broadcast is likely to explore in detail.

It is admirably quiet and also well behaved, with no unpleasant surprises when re-tuning to a different station.

Cut above the rest

In terms of raw performance, the NAD M4 FM/AM/DAB tuner does not necessarily stand out from the best on offer in the sub-£500 bracket: clearly, the law of diminishing returns with tuners sets in.

But it is a very fine product and visually and ergonomically a cut above most and, of course, a perfect match to the rest of the NAD Masters range. We are happy to give it a warm, if not entirely unqualified, welcome.