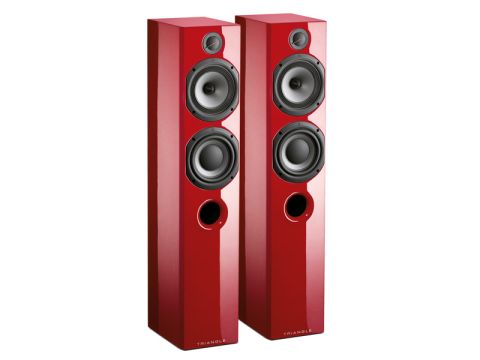 Triangle speakers rarely look anything other than distinctive - it's a range that usually manages at least one quirky styling feature in any given model.

The Color range is the new entry level to Triangle ownership and at this price point, distinctive styling touches are a little harder to achieve.

Triangle's solution is simple enough; the Color is available in three gloss finishes including the eye-catching fire-engine red. Black and white are also available and if your home decor is compatible, then yellow is apparently in the works.

The £899 'Color Floorstander' tested here is the larger of the two stereo options available. The range also comprises a standmount and a centre speaker for AV duties.

The technology is relatively conventional, with a pair of 160mm mid-bass drivers paired with a titanium tweeter. Triangle claims a sensitivity of 90dB/w from the design at six ohms and they do seem sensitive in practice.

One interesting feature is that the Color cannot be bi-wired, Triangle only fits a single (sturdy) pair of terminals and apparently prefer the results obtained.

The fit and finish of the Color is very good indeed. The lacquer is flawless, the cabinet feels solid and well-designed and the screen-printed Triangle logo looks very smart.

Individual grilles are supplied for each driver and the tweeter has a permanent protective cover. Unusually, the Color has no plinth at the base. Instead the spikes attach directly to the bottom. This results in a visually elegant speaker, but one that is a bit less stable than some of the competition at a similar price, if health and safety is a concern.

Placement-wise, the speaker is a whisker under a metre high and will work happily in a typical UK living room or bedroom. It's front-ported and seems to work well enough close to rear walls, but will benefit from being slightly away from them with a little toe-in.

No form of bass tuning is supplied, but the port seems relatively benign in its behaviour and unobtrusive. We obtained good results with both the 70-watt Electrocompaniet ECI3 and 500-watt Musical Fidelity M6 500i, so we cannot see them providing too much of a challenge to a £500 or upwards amp.

Although sounding slightly lively out of the box, a few hours running-in soon eliminated this. And what remains is a very confident and full-sounding loudspeaker.

We were especially taken with the tonality that it offers. Voices and instruments, particularly those handled by the titanium tweeter, are detailed and beautifully defined. There is a very real sense of presence and decay to the top end, which greatly aids the sense of realism.

The sweet, expansive top end is paired with a strong and detailed bass response. The speaker follows complex bass lines with considerable aplomb and the sense of life and excitement that it brings to up-tempo music is especially pleasing.

Compared to the excellent Epos Epic 5, the Triangle sounds very slightly muddled in the lower frequencies, but equally goes lower and smoother than the Epic, so it is quite easy to see why some listeners might prefer the Triangle.

The soundstage the speaker presents is detailed and expansive. It does a very creditable job of conveying the scale of larger pieces without overblowing smaller ones, although we feel that it's definitely happier given an orchestra than a string quartet. In many ways, the more the Color is given to do, the better it sounds.

The Color is both even-handed and musical. In fact, it's very easy to spend hours in its company without ever finding the sound fatiguing or dull.

It would be easy to start banding around phrases to the effect that the Color sounds as vivid as it looks, but that would be slightly unfair. But what we do have is a speaker in a startling outfit that gets an awful lot right most of the time.