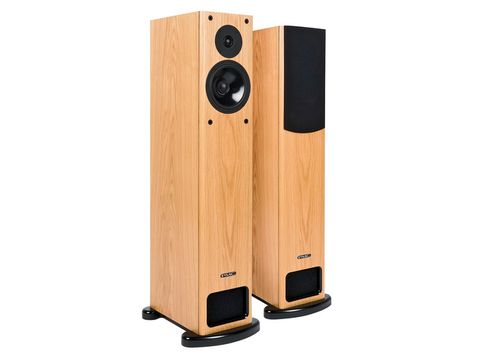 This fine all-round performer has firm, deep and clean bass, a slightly laid-back midband with little coloration bar a hint of congestion, and a sweet, well judged top end. It's competitively priced too

With a heritage which takes the BBC tradition and laces it with a healthy obsession for transmission line bass loading, PMC is one of surprisingly few specialist hi-fi companies founded in the last 20 years to get themselves properly established.

Furthermore, it's one of remarkably few loudspeaker brands to have achieved similar success with both hi-fi and pro audio sectors.

The original FB1 first appeared about a decade ago. It was the first floorstander introduced by the company and its outline design has remained exactly the same throughout. However, it has been the subject of several detail refinements along the way and it's no longer possible to upgrade those early examples to the current specification.

It featured a new 27-millimetre soft fabric dome tweeter which PMC co-developed with OEM manufacturer SEAS and included substantial improvements to crossover components, in cabinet and plinth fit and finish, as well as in the bass/mid drive unit with its 125-millimetre doped paper cone.

The transmission line is a full three metres long here, so this speaker stands one metre tall, while the width is largely determined by the 170-millimetre diameter of the bass/mid driver frame.

The baffle edges are nicely rounded, and the enclosure is finished in real wood veneers – oak, walnut, black ash or cherry.

The folded, tapered transmission line might make cabinet construction complex and costly, but it does provide considerable stiffening for the enclosure side panels.

Exactly how such loading differs from the almost ubiquitous reflex, or indeed the tuned column, has long been debated, since all have similar impedance characteristics. However, it seems likely that the transmission line approach has superior main driver rear-radiation absorption.

When undertaking a group test which includes a previously well-rated favourite, there's always that moment of doubt when the listening tests begin. In this case, the question was whether the FB1i would still measure up, sonically speaking, to a generally somewhat more costly group of alternatives.

Happily, this speaker is still a class act, fully able to hold its head high, even though the competition is exceptionally varied and usually rather more expensive.

The slight presence restraint and mild associated congestion remains obvious enough, but that's the only significant real source of criticism, and this gives the overall sound a rather 'laid back' character.

In other respects, the FB1i is a very fine all rounder, the good enclosure control and impressive freedom from boxiness – in a real sense it sounds more like a standmount than a floorstander in this respect – perhaps being its most obvious strengths.

The bass is powerful and goes deep without any tendency to 'thump', lending the music an impressive sense of scale.

Stereo images are slightly distant, but have fine focus and the attractively sweet top end is nicely judged and avoids drawing unnecessary attention to itself.