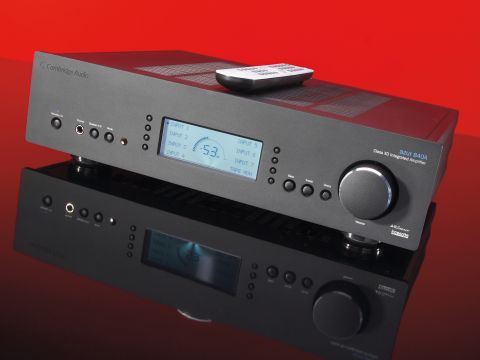 Cambridge has revised the details of XD's implementation, at the same time refining the balanced input for lower noise and distortion

Honestly, the biggest difference between this and most amps costing twice as much is in the looks/show-off factor. It's more than competent sonically, and comes attractively specified too - we love it

It seems like only yesterday that we first encountered the 840A, but in fact it was a year and a half ago, and that's evidently been time enough for the designers at Cambridge Audio to develop a few tweaks and circuit improvements for it, resulting in the new 'V2'.

Just to recap, the most exciting thing about the 840A was its employment of a new class of output stage, 'Class XD', which is claimed to offer Class A performance without the daunting power and heat implications of pure Class A. With the V2, Cambridge has revised the details of XD's implementation, at the same time refining the balanced input for lower noise and distortion.

The amp still looks much the same, though: a package of moderate bulk but considerable weight, with a vast mains transformer, generous heat sinks and multiple circuit boards ingeniously packed into a minimum amount of space.

The transformer and heat sinks are accounted for by the rating of 120 watts, while the circuit boards manage not just the basic amplifying task, but also comprehensive remote-control functionality, protection from just about every imaginable fault condition and a real audiophile touch in the shape of relay-switched step attenuation for the volume control.

That last feature has plenty going for it, but for us it remains an annoyance, with its unavoidable chatter of relays every time the volume control is touched. Relays also handle switching between the eight inputs, all of which except 'tape monitor' can be renamed.

The single balanced input is selected by means of a rear-panel switch. Build and component quality aren't super-audiophile level, but that apart, the basic spec of this unit goes way beyond its price tag.

It's clear that the similarities between the original 840A and the V2 outweigh the differences. In fact, we've ended up coming to many of the same - and mostly favourable - conclusions.

As before, we found tonality excellent, with very good extension in both bass and treble, combined with really superb grip of the bottom octaves. It doesn't actually extend the bass response of small loudspeakers, but controls them so well that it appears to do just that, making bass not only powerful, but also tuneful.

This is a very useful attribute in an amplifier as improving bass by upgrading your speakers is an expensive (and often stressful) exercise.

One area where the V2 has improved over the original 840A is imaging. This was already good, but is especially impressive with the new model, which seems to have just the qualities to maximise both side-to-side precision and depth.

The latter is sadly rare in recordings, but when dealing with one that does it well, this amp makes the point very clearly, and some familiar renderings of operatic and symphonic scores stretch away behind the speakers most impressively and believably.

If your tastes run to rock, pop or jazz, there may be less need for that, but the 840A's detail, control and sheer slam will be no less welcome - and with any music it's always highly listenable, even at low volume, where some muscular amps become insipid.

Put it up against true high-end amps and you might become aware of a trace of hardness in the sound, but really, this is a cracking piece of kit at a great price.