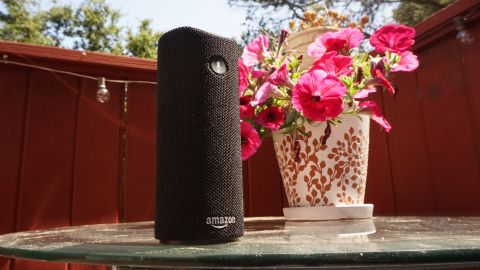 Amazon Tap improves upon the Echo's legacy by adding dual stereo speakers and a battery pack … only to take two steps back by cutting out one of its predecessor's most important features.

It's been a full year since the launch of the Amazon Tap, the portable version of the Amazon Echo. When we first got our hands on the Tap, it was hard to even wrap our heads around what the Tap was aiming to be.

Thankfully, one year and one MAJOR software update later, we've got a better idea of what Amazon was aiming for with its portable Echo.

At its core, it's a basic Bluetooth speaker that has Alexa built into it. The advantage of this is that the Tap is portable – well-suited for a friend's house or a day at the beach. Not only is it smaller and totable, but it's cheaper, too.

But perhaps more importantly, it sounds better, thanks to dual stereo speakers, and it's smarter thanks to the constant monthly updates that have come to Amazon's AI. It should be the speaker we've been pining for.

The Amazon Tap's resemblance to the slightly taller, portlier Echo is uncanny. It only comes in one color (black) and its only distinctive marking is the silver Amazon logo that sits flush above the base of the unit.

The biggest difference from the Echo is that the Tap is almost entirely coated in a mesh fabric. Inside the unit are two, 1.5-inch drivers, dual passive radiators and a battery that's capable of going nine hours on a charge.

There's also the Tap button on the front (emblazoned with a microphone) that the full-size Echo lacks, a quintet of inset media controls along the top of the cannister and power and Bluetooth sync buttons on the lower back side. Also new are the 3.5mm auxiliary audio jack and micro-USB port that's used to charge the Tap.

The Tap is arguably well-designed. Controls on the top are welcome improvements on the Echo's minimalist facade, and a dedicated button for Bluetooth means your friends and family can use the Tap without going through the rigmarole of downloading the Amazon Echo companion app.

Where the Tap excels above and beyond its predecessor, however, is in its audio performance. While I felt music coming from the Echo was always muddled and had dulled mids and highs, the Tap performed extraordinarily well given its size.

The music I played on it – a mix of rock, electronic and rap – sounded astoundingly clear, with better tonality and more accurate details than several other Bluetooth speakers I've tested recently. If I had to place it somewhere in the pantheon of speakers, the Tap comes in well above both the Beats Pill and Bose SoundLink Mini, but doesn't quite rank quite as high in my book as Creative's Sound Blaster Roar 2 or the Razer Leviathan Mini.

The Tap can draw on two sources for audio, either directly from your mobile device via Bluetooth or, if it's connected to a Wi-Fi network, from streaming services like Spotify, Pandora, iHeartRadio, TuneIn and, of course, Amazon Prime Music.

Connecting the device to the services you want to use is done through the still-rather-clunky Amazon Alexa companion app. But, the good news is that once you're connected, you really don't need to spend too much more time with it.

Songs ultimately sound a bit better when using Amazon's native streaming service than when you use your mobile device but the difference is a minor, almost imperceivable one.

Here's a good place to point out that the Amazon Tap is one of three devices put out by the Washington-based online e-tailer that uses an artificial intelligence called Alexa, this sort of nebulous personal assistant similar in many regards to Siri on Apple devices and the phrase "OK Google" on Android.

Two years on and Amazon's grand experiment in artificial intelligence is still going and showing no signs of slowing down. Alexa receives more updates than my Amazon Fire TV or the Kindle, and the team of developers have proven time after time that they really care about feedback.

Alexa, as an AI, used to feel more like a fun parlor trick that I could show off at a dinner party, rather than a full-fledged personal assistant, like the other two. But it's quickly becoming the center of my burgeoning smart home.

The recent additions of information about local businesses alongside popular third-party apps, like Uber and Dominos, are a big step forward, and shows that other companies are taking notice of Alexa and want to integrate their services with it. It's validation that this project has become bigger and more important to Amazon than anyone could have predicted.

On top of all that, smart home device manufacturers like Philips and Nest seem to be getting on board with Amazon's Alexa more than any other platform.

Thanks to a major overhaul of the Amazon Tap firmware that gives it an always-listening mode, we're happy to recommend the Tap as a decent Bluetooth speaker. There are better values out and dozens of portable speakers that sound better, but none of them can claim to pack an AI under the hood.

In essence, that's what makes the Tap so special: it's a smart home controlling, wickedly smart artificial intelligence when it's home and connected to your Wi-Fi and a proudly decent Bluetooth speaker when you're on the go. Portability and versatility? Now we're talking.