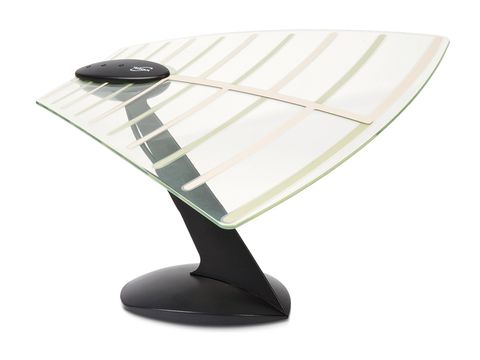 Although not brilliant, the Telecam TCE2001 will work well in areas with an already strong signal

The Telecam TCE2001 is a fin-style table-top directional indoor aerial in the traditional style.

Assembly is a simple three-step process, aided by some helpful diagrams that illustrate how to connect the stem to the base.

There's a separate amplifier that can be wall-mounted using the supplied fixing plate, but it must be fixed within 90cm of a power point.

The aerial is a touch rickety, but steady enough on a flat surface and the angle can be adjusted through 90° between horizontal and vertical.

Performance was good with the main BBC channels but some re-adjusting was required to pick up BBC News and BBC3 suffered bad glitches. Sky 3 tuned in perfectly, but Sky News suffered occasional glitches.

No other channels were picked up. Switching the amplifier on and off made no difference to the performance, indicating that the non-amplifier version, the TCE2000, which is available for under £10, would be the better bet.

Overall, this is a decently built model that should work perfectly in areas with good to excellent reception. If you live in an area with marginal reception it will be a matter of trying and seeing whether it works or not.

Our advice is to only invest in the TCE2001 if returning it is not going to be a problem.