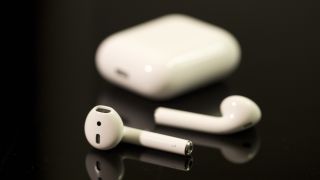 I hate to break it to you, but if you’ve worn a pair of Apple EarPods or AirPods recently, you were tacitly supporting the Empire – you know, that military group from Star Wars that tried to control the universe through fear and exploitation.

In what has to be one of the strangest conversations about the mash-up of Apple and Star Wars, well, ever, Apple design lead Jony Ive told Star Wars: The Force Awakens director J.J. Abrams that his primary inspiration for Apple’s iconic in-ear headphones were none other than Stormtroopers.

This strange tidbit of information appeared in an interview in The Wall Street Journal where Ive was describing his design inspirations over the years.

Crazy as it sounds, however, it sort of makes sense.

Finding inspiration in a galaxy far, far away

While Ive is the latest in a long line of creatives to lift some inspiration from George Lucas’ iconic creation, he’s far from the only one.

From the autonomous robots to some of the work done in hologram displays (cough, Microsoft HoloLens), the story of a farm boy defying physics to destroy his father’s legacy has inspired thousands of inventions, films, television shows and novels over the years.

That said, Apple has repaid the debt when Ive helped Abrams come up with the design for Kylo Ren’s three-pronged lightsaber in Star Wars Episode VII.

According to a profile piece on Ive that ran in The New Yorker in 2015, Ive told Abrams that he thought Ren's lightsaber should be “more analog and more primitive and I think in that way, somehow more ominous,” in an attempt to convey Ren's interest in the archaic Sith arts. It worked.