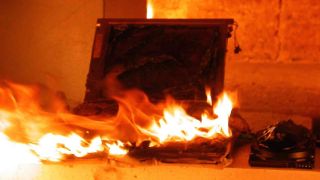 What, you don't want to fix my PC?

Being techy can be lots of fun, but it can also be a burden: while technology is absolutely everywhere, not everyone who's bought it knows how to use it or what to do when it goes wrong.

That's where we come in, whether we like it or not: as far as friends, family and co-workers are concerned we're the go-to guys and girls for every kind of computer calamity from wonky Wi-Fi to troublesome torrents.

We're happy to help, of course, but sometimes we can't help thinking that people are taking the mickey. Here are ten completely unreasonable things non-geeks expect us to do. Are there any we've missed? Let us know in the comments.

1. Fix their PC at parties

It doesn't matter whether it's the folks' house at Christmas or a friend's flat on a Friday night: if there's a PC in the building, (a) there will be something wrong with it and (b) you'll be asked to fix it. You won't be asked outright, though: you'll be talked into volunteering. "Emma's been so sad since her laptop stopped doing stuff," they'll say. "I think if it isn't fixed soon she'll mess up her dissertation and fail her degree and become homeless and live under a bridge drinking paint."

2. Turn a blind eye to their downloads

There are some things in life that once seen, cannot be unseen — and when you're looking at a friend's or relative's computer, those things are likely to involve some kind of adult content. That content could be in the form of apps ("Why does Grandad's iPhone have Grindr on it?"), podcasts ("Isn't Finn a little young to be listening to the "Hot Sexy Teacher Sex" podcast? He's only seven") or entire folders full of balloon fetish pornography, but whatever it is it'll be the first thing that appears on-screen when you take their computer out of sleep mode.

Never, ever let a stranger know that you're techy: that way you won't have to troubleshoot codec problems for a taxi driver at two in the morning or become the go-to guy for everyone in the office. Techy people are always on call.

"My copy of Office has stopped working!" Yes, the trial period's expired. You'll need to buy it, or use an alternative. "But I like Office! Isn't there..." — there's a knowing look at this point — "...something you can do?" It's not just software, either: it's movies and ebooks and MP3s too.

5. Clean out all their crapware, again

Just last week you removed 220 bits of spyware, seventeen viruses, three Trojan horses and a partridge in a pear tree, leaving them with a list of decent and free security software and some helpful advice. The phone rings, and you realise that every word was wasted. "Our computer's gone all slow and wonky again. Could you come and take a look at it?"

You've been asked to look at a PC. It's riddled with viruses, has twenty-three browser toolbars installed, its desktop is full of files with names like "rihanna naked pics definitely real oh yes this one isn't a virus.exe" and it has an installed software library worth approximately seventy-eight million pounds. "I don't understand why it's acting so weird," they'll say. "It's not like I've installed anything dodgy."

7. Save all of their stuff

"Remember the computer I had before this one, the one I erased all of the data from and then removed the hard disk, drilled seventeen holes through it and melted it in a furnace? I've just realised I'd left a really important document on it. Can you get it back?" See also: photos taken six years ago on cameras they no longer have on memory cards that can't be found.

That water-into-wine thing was small fry compared to the things people think we're capable of. "Yeah, I know it's a Commodore 64, and all the keys are missing, and it's currently on fire. But you're good with this kind of thing. Can you make it run Max Payne 3, please?"